The corner of Porter and Marshall streets was transformed into an exotic, colorful wonderland. And it’s here to stay.

Artist Pauline Houston McCall is leading a group of children in splashing colorful paint along the once-dull exterior walls of the Children’s Playhouse Early Learning Center in the Whitman neighborhood.

What were once brown cement panels are now scenes from the jungle, with lions, elephants, koala bears and other majestic creatures.

“If I can paint a mural over this ugly brown that is all over Philadelphia, I’m on it,” said McCall,  who has previously painted large murals in New York as well as exhibits at Philadelphia’s African American Museum. “The fact that we can teach culture and history and science all through art and music is profound.”

Children were treated to a two-part session with McCall and her husband Rob, who run Raising Music, a unique, interactive experience for kids of all ages combining music, art, history, literacy and theater.

After painting with Pauline, kids rocked out with Rob, who taught kids basic drumming skills using drumsticks and buckets while seated in the middle of a closed-off Marshall Street.

“It’s all about engaging the kids and showing them what they can do if they really focus their minds,” Robb McCall said. “If you have someone who believes in your potential, and point out how you can access that potential, kids realize their greatness and do better things with their lives.”

The arts and music were a sneaky way of intertwining children with learning in teams, which has been lost during the age of virtual learning during the pandemic.

“These students haven’t been in school all year so we knew we had to plan activities over the summer that would help them with their social, emotional, self-esteem and problem-solving skills,” said Children’s Playhouse owner Damaris Alvarado-Rodriguez. “We tried to find ways to keep them busy and working together, so we invited Pauline in and gave her some space. We thought it would be great exposure for the children.” 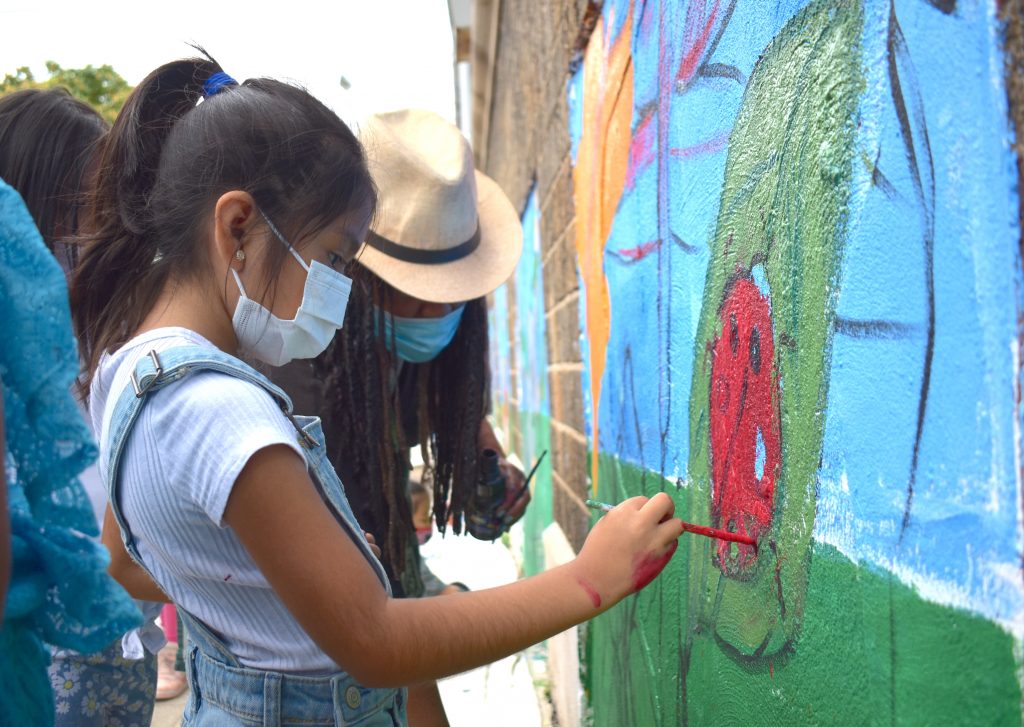 During the process of painting murals, kids were assigned positions on the blue and green teams, which worked toward the same cause of beautifying the side of a once-bland building. It not only brought smiles to a diverse group of children, but also residents in the neighborhood, who didn’t mind the new picturesque scenes.

“I selected the jungle because a lot of this landscape is where a lot of our children are coming from,” Pauline McCall said. “We have a lot of southeast Asian, some Peruvian. It’s very diverse. It connects with the land and the animals that represent the classroom. I love how the people from Asian and Latino countries have stopped in the neighborhood and have been really appreciative. It’s part of their homeland.”

Alvarado-Rodriguez has seen the neighborhood change for the better since arriving in 2014.

“When we first moved here, we’ve seen some really great changes to the community,” she said. “There was prostitution and drugs and a very dirty neighborhood. But since we’ve been here, we’ve seen a lot of that go away.”

The painting project has been going on all summer. First, McCall and the children primed and color-blocked the intended areas and later laid out the shapes of the animals. This week, students helped fill in the colors of the animals, like tigers and elephants.

“This really allowed them to work in teams,” McCall said. “They gathered themselves in little committees and really loved it.”

The project will continue into the fall. And additions will be made.

“The community loves it,” Alvarado-Rodriguez said. “We’re looking to put in some planters between (the murals) so we can really bring out some green space.”

“At the beginning of the camp, there was a lot of fighting and arguing,” Alvarado-Rodriguez said. “Towards the end of the camp, you hear them using strategies that we have implemented. I’m really proud of them. They are ready to go. Ready to get back to school.”