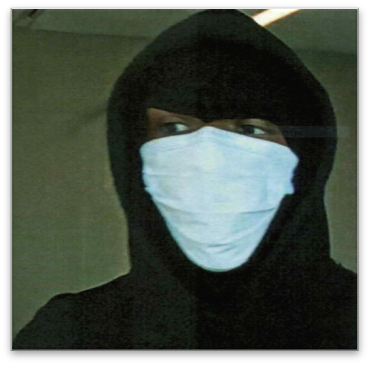 Federal officers are looking for an armed suspect they believe robbed two banks roughly within an hour of each other on August 25.

According to officials, a suspect described as a black male, approximately 6-feet tall with a thin build, wearing a black hooded sweatshirt, black skull cap, black pants, white sneakers, a white mask and a clear plastic glove on his right hand entered the Chase Bank at 2815 Grays Ferry Avenue at 1:43 p.m. and handed a bank employee a threatening note, saying he had a gun. He then displayed a handgun tucked in his waistband, officials said.

He told the employee to walk with him to the teller window and hand the teller the note. As the teller read the note and put their hands up, the subject made a verbal threat referencing his gun. After receiving an undisclosed amount of cash, the subject fled the area of the bank on foot, officials said.

An hour later, the subject entered the Wells Fargo Bank at 65 West Baltimore Avenue in Lansdowne and handed a teller a threatening demand note that said he had a gun, officials said. Police believe he may have fled the area with an undisclosed amount of cash in a dark gray sedan.

The FBI/PPD Violent Crimes Task Force is seeking the public’s assistance to identify and locate the suspect, who is considered armed and dangerous.

Anyone with information about these robberies or this suspect is urged to call the FBI/PPD Violent Crimes Task Force at 215-418-4000. A reward is being offered for information leading to this subject’s capture. Tipsters can remain anonymous.