Ruth Wilson was called into action 75 years ago.

As one of 600,000 African American women who worked in government factories and offices during World War II, this Rosie the Riveter who lived on South Street received a long-overdue “thank you.”

On Sept. 8, Wilson returned to the Philadelphia Navy Yard’s Dry Dock 5 for the first time since she helped assemble aircraft carriers during the war. Now 99 years old, Wilson received thanks and honors for her role supporting the U.S. military.

“It means so much to me that my daughters and other family members can see where I helped build an aircraft carrier,” said Wilson, surrounded by family members at Philly Shipyard Inc.

Wilson helped build the USS Valley Forge, which played a crucial role in several U.S. Navy operations, mainly its four deployments during the Korean War. Among others, it saved the lives of 28 crewmen of the SS Pine Ridge after it was destroyed in a storm and the Valley Forge also was the prime recovery vessel for an early unmanned Mercury space mission.

The ship took about three years to complete and Wilson was a key contributor as a sheet metal specialist. Following the Japanese attack on Pearl Harbor, Wilson quit her job as a domestic and received training at Bok Technical High School in South Philly before working at the Navy Yard.

“I was proud to be one of the 600,000 African American Rosie the Riveters who served our nation during its time of need,” Wilson said. “I must also acknowledge that while we were patriotic and went to work, Black Rosies were also fighting against racism, segregation and sexism right here.”

In the 1940s, more than 80 percent of employed Black women were locked in low-paying jobs as sharecroppers and domestics, according to World War II historian and filmmaker Gregory S. Cooke, who was on hand to present Wilson with a limited-edition print of Wilson featured as Rosie the Riveter.

“Wilson’s resilience and determination typified the spirit of African American women as they sought brighter futures for themselves and family members in a country dominated by systemic racism and gender discrimination,” Cooke said.

“Mrs. Wilson worked here during World War II along with thousands of other women who helped America win the war,” Cooke said.

An official presentation and ceremony was held in front of the UNSN Charlton, which currently occupies Dry Dock 5. The Charlton is a cargo ship named for Sgt. Cornelius H. Charlton, an African American Medal of Honor and Purple Heart recipient. The ship will soon leave, making room for a $1.5 billion project that will include the creation of at least four vessels that will bring 1,300 jobs to the shipyard, continuing the city of Philadelphia’s role in building ships.

“We have a great tradition of ship building here and a very high respect,” said John Bond, project manager at Philly Shipyard. “A number of the employees have followed their parents and grandparents and great-grandparents. It’s really an important thing.”

Bond expressed his gratitude for Wilson’s efforts three-quarters of a century ago.

“This is a very special place for Mrs. Wilson,” Bond said. “Right here at this spot, she worked on the USS Valley Forge, which was built right here in this dry dock. To me that’s absolutely amazing … This is one of the top highlights of my career to stand here today and honor your services for what you have done for this country and having you here as a fellow ship builder.”

Wilson was honored by The Four Chaplains Memorial Foundation with its Appreciation Award and was given a framed photo of the USS Valley Forge.

“Working at the Navy Yard was a life-changing experience,” Wilson said. “I made more money than ever before, enough to improve the lives of my family and it opened the doors of opportunity for all women, especially black women. The results of what we did are everywhere.” 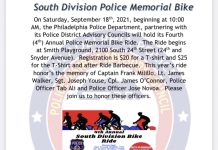