Days went by. Then weeks.

The South Philadelphia High School girls soccer team was starting to wonder if this season was going to be just like last fall, when the slate of games was moved to the spring and the team played just four games.

The start of this season started similarly. Games and practices were canceled due to bad weather and other circumstances and the Rams were starting to wonder if their season opener would ever come. On Sept. 20, it finally did and soccer season had finally begun for Southern.

“It was hard,” senior Hanna Speizman said. “It was two weeks that we were supposed to be having games. But then being able to go out and win is really great.”

Speizman and the Rams wasted little time, earning a 3-0 win over Horace Furness at the South Philly Super Site. Speizman scored twice in the first half and Virginia Bruck added an insurance marker in the second half. Speizman’s goals were the first of her high school career.

“It was my first two goals in high school so it was great,” said Speizman, a student at Girard Academic Music Program who has played all four years at Southern. “It just felt really good to get on the scoreboard for the team.”

Southern is now 2-0 after a 3-0 victory over William Bodine on Friday.

In the meeting with Furness, Southern had only 10 players available to play. The Falcons showed tremendous sportsmanship by also playing with 10 players despite having a few to spare.

“I think we understand that especially this year that a lot of schools are having trouble getting girls to come out,” Furness coach Diana Esposito said. “We’re really here just for the girls to play. I’d hope other teams would do that for us.”

For Furness, it was just the team’s second contest, as the Falcons lost their opener, 6-3, to William Bodine. Senior Delice Mbonigaba said she’s happy just to be playing soccer again after a year of uncertainty.

“For some of us, we just always wanted to play soccer during this quarantine time,” Mbonigaba said. “To be able to play with our teammates against other schools is a blessing and a great opportunity.”

Southern kicked off its week with a 4-1 victory over Franklin Learning Center on Sept. 21 on the strength of two first-half goals by Boubacar Traore. The Rams (3-2) continued their week with a 1-0 loss to Science Leadership Academy before blanking Boys Latin, 1-0.

Academy at Palumbo suffered back-to-back losses, a 3-1 setback to String Theory before a 4-2 loss to Since Leadership Academy.

Furness was defeated 6-1 by George Washington but followed up with a 2-2 tie with Abraham Lincoln. The Falcons are now 2-2-1.

Neumann-Goretti defeated Conwell-Egan 30-6 to remain perfect in the Philadelphia Catholic League Blue Division (2-0, 3-1 overall). The Saints led 8-0 at halftime before breaking the game open in the second half. Neumann-Goretti will next travel to Bonner-Prendergast on Friday.

Southern suffered its first loss of the season, as the Rams came up just short in a 20-14 loss to George Washington. Southern (2-1) will face undefeated Abraham Lincoln (3-0) on Thursday night at the South Philly Super Site. The Railsplitters have outscored their opponents by a combined 147-6.

After an 0-2 start to the season, the High School for Creative and Performing Arts has hit its stride. The CAPA Pegasus reeled off straight-set wins over Julia Masterman and Walter B. Saul to even their record on the season.

Furness suffered back-to-back 3-0 losses to Roxborough and Tacony Academy Charter and is now 2-3 on the year.

Neumann-Goretti dropped a 3-0 decision to Bonner-Prendergast and is now 1-2 in the Catholic League.

Audenried was defeated 3-0 by Jules Mastbaum but rebounded with a 3-1 victory over Samuel Fels. The Rockets are 2-2 on the season.

Academy at Palumbo squeaked out a 3-2 win over G.W. Carver Engineering and Science and had a pair of games postponed later in the week. The Griffins have won all three of their Public League matches so far. 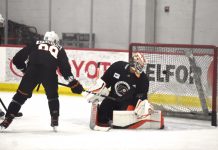