If you wanted to take down Johnny “Doc,” then I guess you’re happy. But maybe you shouldn’t be. I think you have to get beyond whether you liked him or not. Justice isn’t about whether you liked John Dougherty or Councilmember Bobby Henon. Justice isn’t about whether they are nice guys or not. And most importantly of all, justice in this case shouldn’t have been about whether you think there should be a ban on outside employment by members of City Council. Such a ban should’ve happened without a trial. Justice in this case is about whether the Feds proved their case beyond a reasonable doubt. They claimed that what happened here was bribery rather than the rough and tumble, often troubling, often ugly process of lobbying that is currently legal. And, no — they didn’t prove their case. Six years of wiretapping and this is what the Feds got? Cue Peggy Lee singing “Is that All There Is?”

I don’t care whether one of the guys on trial was Johnny “Doc” or “Doc” Rivers. There was no smoking gun. No there there. And without a smoking gun moment on those tapes, no one can make a distinction between bribery and lobbying. I suspect that a lot of so-called legal experts agree with me. That’s why goody two-shoes organizations unanimously hate lobbying. Why? Because to them, lobbying is a kind of legal bribery.

What was new that came out of all those tapes? Nothing. What? Councilmember Bobby Henon got paid $72,000 a year for being on Dougherty’s payroll? Even paid taxes on it. Six years of wiretapping to tell us what we already knew — that there’s a danger that holding a conflicting side job might sway the way you vote? Duh.

How do you think corporate lobbying works? A corporate lobbyist donates money for Big Pharma, say, donates money to the campaign of a congressperson. Lo and behold, the congressional rep votes against allowing the government to negotiate for better drug prices. Is that bribery any more than a councilmember taking a salary from a union and then voting for legislation favorable to that union?

How — in today’s political environment — can you tell the difference between bribery and legal lobbying? I’ll tell you one way you DON’T make the distinction. You don’t conclude that if a labor leader does it, it’s automatically bribery. You don’t automatically figure the guy who’s a little rough around the edges is doing something illegal because he uses “F bombs” while the lobbyist speaks in words with more than four letters. The truth is when the City decided to allow councilmembers to hold side jobs, it tainted their votes forever more.

Here’s the way I see it — Johnny “Doc” is maybe the most powerful labor boss in the country. Or was, since he’s been forced to resign that post. Dougherty is one of those complicated characters they make movies about. He’s done well by his members. He’s not Lee J. Cobb in “On the Waterfront.” He’s also not Mother Teresa. He’s made, perhaps, as many powerful enemies as he’s made powerful friends. When the Feds devote six years to wiretapping you, they’ve got a vested interest in not coming up empty. When they do come up empty, they still have a vested interest in making sure you go down.

Councilmember Bobby Henon could’ve been a number of different politicians in this city. Interchangeable and invisible. I’m sure he figured you take Local 98’s money. Report it. Pay taxes on it. Know that several progressive members in Council have taken donations from Johnny “Doc” and haven’t felt like they had to take a shower afterward for doing so. Then where’s the problem? Henon found out where’s the problem.

Not that this thought should have affected the verdict, but will any good come from it? You can likely get a line on Bet.com on how quickly Council votes to ban its members from taking side jobs. A little late, but better late … It will almost certainly hurt the political prospects of several prominent councilmembers. The ones who want to be mayor, but have taken the side cash. The ones who are already scrambling to justify their actions. Their opponents are ready and armed with reasons these folks shouldn’t be allowed anywhere near the most important desk in City Hall.

The mayor declined to comment on the outcome of the trial. But you don’t need a Rosetta Stone to figure out how he feels. His defense of both Dougherty and Henon spoke volumes. Note — I suggest the city sell Rosetta Stones outside City Hall Courtyard — the tax on the sale simultaneously going toward pre-kindergarten education and reducing the tax on soda.

Guess who loses by the inevitable diminished political influence of Local 98? The hard-working members. The anti-union forces around here may have already sprained their arms lifting a glass of bubbly to toast the change that’s about to come in this city in the balance of political power.

Here’s a positive — there’s a chance they’ll finally bring Council’s ethics law into sync with the state’s. Philly’s law does NOT apply to nonprofits, according to CITY LIFE, while the state’s ethics law does.

And if you enjoy irony, you could say that John Dougherty and Bobby Henon got convicted for violating ethical standards that are unclear at best. As for Henon, he introduced a bill in 2015 to bring Philly’s ethics code in line with the state’s, to avoid confusion. Precisely the kind of confusion that helped convict him last week.

You can’t make this crap up. 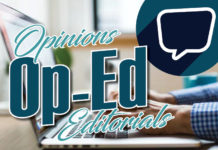