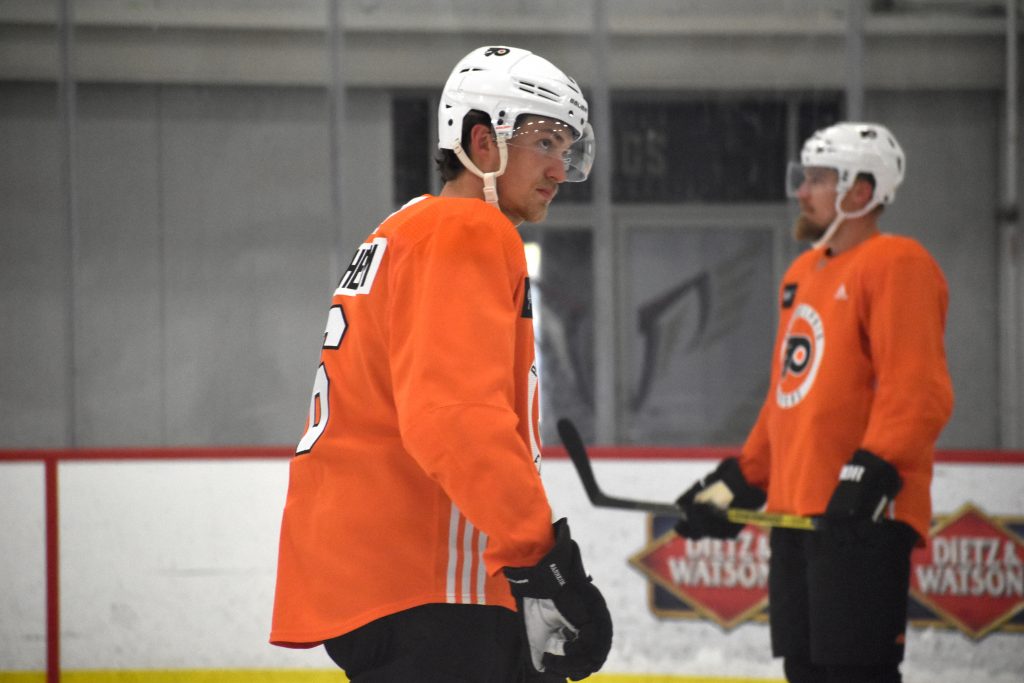 There’s still a lot of uncertainty surrounding the National Hockey League’s season. So far the Flyers have had three games postponed, which includes games against the divisional rival Islanders, Penguins and Capitals. There could be more announced by the time this article runs in print.

With all that is uncertain, let’s take another stab and nail down a few predictions. It’s something that was attempted in this publication’s season preview with “5 Bold Predictions” and the results are hovering somewhere between pretty bad to awful, which sounds a little bit like the Flyers season so far.

First, we look at the few things we got right: We predicted the Flyers to have a good start, and they did. We guessed at a 6-2 start and Flyers went 5-2-1. That’s pretty darn close. Next, we predicted Cam Atkinson would lead the team in goals this year. Through the holiday break, Atkinson had a team-leading 12 goals, which was one better than Claude Giroux. Atkinson was getting 7-to-1 odds before the season so we’ll take a nice tap on the pads for looking good on this one so far.

Next, we look at what we got wrong: We said Ivan Provorov would finish top-five in Norris voting. Ryan Ellis’ absence has hurt Provorov pretty badly, and he’s been unable to carry the load on the top pairing. It would take a massive turnaround to get that kind of consideration at this point.

We also predicted Travis Konecny to score a career high in goals. His best is 24. He has five in 29 games this season. That puts him on pace to finish about 10 goals shy of that mark. It could still happen, but it’s not looking good.

The last was we said the Flyers would win the Metropolitan Division. You wanted bold, right? We could do the math, but just looking at the latest odds and the Flyers are about 90-to-1 to win the Metro. So you can see that’s not going to happen.

But 2022 is a new year and let’s go all-in with five new bold predictions to take us through the rest of the season.

Yeo finishes the season as head coach: Mike Yeo took over the head coaching job on an interim basis for Alain Vigneault and was able to steer the Flyers out of their 10-game losing streak and back to playing some decent hockey before the holiday break. Part of it was due to a softer schedule, and the Flyers haven’t been hit by COVID nearly as bad as some of their rivals. Many thought Yeo might last only a week, but look at him now. The only way we see the Flyers hiring a new coach would be if they think they can make the playoffs. It will take an enormous effort to get back in the conversation and it would be Yeo who got them there. If the Flyers flounder, what’s the point of changing coaches again in a lost season? A permanent change could come, but it probably won’t be until the offseason.

Couturier bounces back big: Sean Couturier has not looked like himself after the first eight games of the season. Couturier started strong with 11 points in those first eight games and has contributed just six points in his most recent 21 games. He’s also looked lost at times in the defensive zone. Maybe it was an injury or just a really cold stretch but Couturier is too good to stay at those numbers. Hopefully, the rest did him some good. Look for a market correction and Couturier to pot nearly a point per game the rest of the way. Let’s say 65 points is the new mark.

Yandle falls short of record: We take no joy in this prediction. Keith Yandle is now just 13 games away from tying Doug Jarvis’s NHL record of 964 consecutive games played. But seeing the way players are missing games this season due to COVID protocols has to be scary for Yandle. But weird things do happen. Remember when Andrew Cogliano got to 830 consecutive games and then was hit with a suspension to break his streak? Hopefully, we’re wrong on this one.

Flyers extend Ristolainen: I’m on record as saying the Flyers should cut bait despite giving up two high draft picks to bring in Rasmus Ristolainen, a pending unrestricted free agent. And I stick to it. But something tells me the Flyers like what they’ve seen with the big Finnish defender and will double down on their investment, as he has admittedly been one of their better defensemen for stretches of the season. The Flyers have a history of offering big contracts after a small sample size, and it seems like we could be heading down that road again.

Sanheim finishes on top: Speaking of Flyers defenders, Travis Sanheim is currently third in scoring among Flyers blue liners. He looks like he’s found new confidence under Yeo and has been more offensive-minded over the team’s most recent stretch of games. Sanheim has six points in seven games since Yeo took over. Even without getting much of a look on the power play, expect Sanheim to finish with the most points among D-men on the team by the end of the year.