Nick DeMeis doesn’t have to drive four hours to Cooperstown, New York to enjoy his fill of baseball history. He just has to walk down a flight of stairs.

The Girard Estates resident has been building his private collection of baseball memorabilia for 40 years — all neatly displayed in a remodeled wash room in his South Philly basement.

“It was just rafters and stone walls and I built this whole area out,” DeMeis said. “When I come down here, I put on old baseball songs and enjoy it.”

There’s plenty to enjoy. It’s a tight space, but DeMeis’ collection includes about 1,300 pieces of America’s pastime, which includes nicknacks of old teams like the New York Yankees, Brooklyn Dodgers, Chicago White Sox, Milwaukee Braves and St. Louis Browns as well as the hometown Philadelphia Phillies. He even has a special section dedicated to the women who played baseball during World War II.

The personal museum was constructed by DeMeis 20 years ago when he moved into his home on South 21st Street. Most of the memorabilia was already in his hands. He just needed the proper way to display it.

“I had a lot of stuff from work,” said DeMeis, who worked as an accountant who worked with merchandisers on baseball stadiums. “I got a lot of stuff for free. And once it started to build up I was getting gifts for birthdays, Christmas and Father’s Day. Everybody knows what I want. And this is what I get.”

Most of the merchandise came from his 9-to-5.

“I worked with merchandisers and we did about 15 baseball stadiums,” DeMeis said. “A lot of the pictures on the wall, they gave me a stack from distributors that sent stuff to the companies to sell at the locations and they eventually get thrown out. Once I got friendly with them, they would tell me what they had and I took everything that was baseball. Everything.”

That supplied the foundation for his collection. Next he went to eBay to fill in a few cravings.

“It became compulsive,” DeMeis said with a laugh. “The most exciting part is getting stuff on bids. Bidding up until the last ten seconds and getting screwed over sometimes is really bad.” 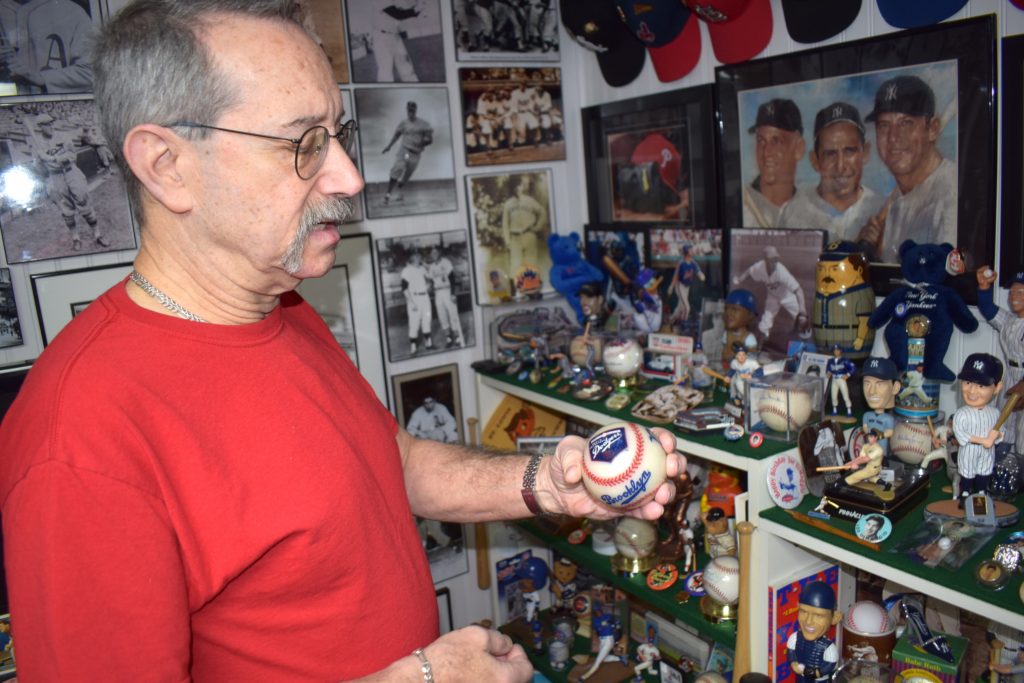 Some of his prized possessions include a player position pin and ribbon from 1895, Connie Mack Philadelphia Athletics 1910 pins, a Brooklyn Dodgers commemorative baseball and about 60 autographs including Willie Mays in a Mets uniform, Hank Aaron, Warren Spahn and Eddie Matthews. Several rare photos from the early days of baseball occupy space on his walls.

It’s enough to be considered a small museum, except not many people have actually seen it.

“Not a lot of people have seen it,” DeMeis said. “They’ve seen photos on Facebook. But this is my happy place. It’s not a man cave, it’s a museum. A vast collection of junk.” 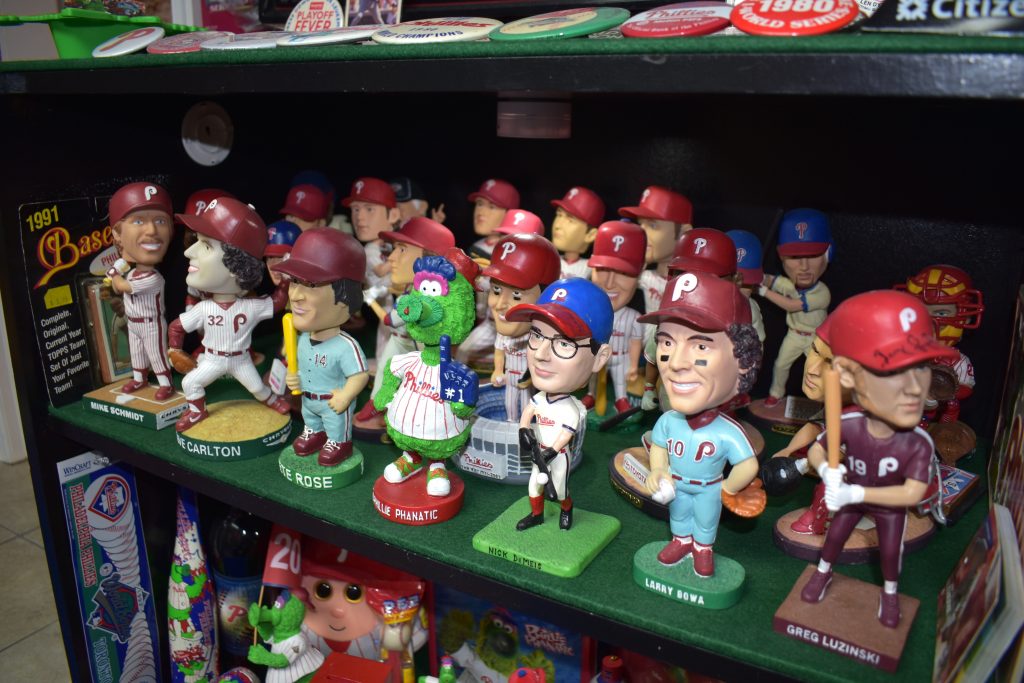 DeMeis said baseball was his favorite sport because he played it as a kid — even though he wasn’t exactly the star player.

“It’s the only sport I could play,” he said. “I was lousy at everything else. And I was barely any good at baseball. I either played catcher or right field. The two lowliest positions.”

DeMeis’ collection continues to grow although he may need to build an extension soon. He’s never sold anything but occasionally trades off something he has a duplicate of. He proudly displays each piece he receives. He tries to limit his new acquisitions to pins that he finds at flea markets because they don’t take up a lot of space. But he has a tough time turning down things that come his way. 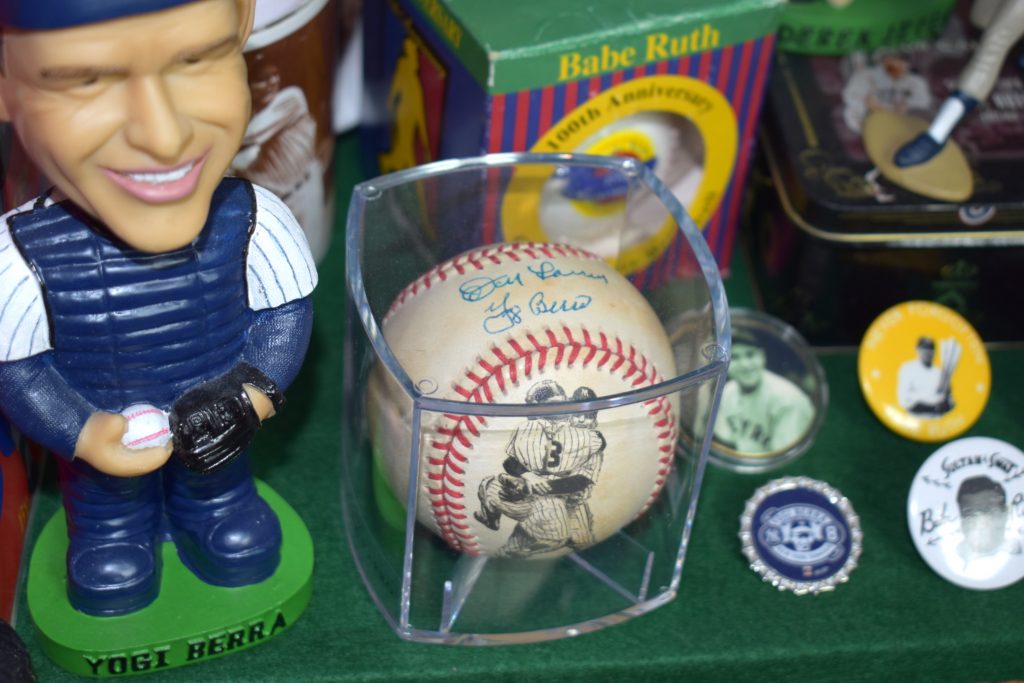 “Friends would say, ‘I have a couple of things in a drawer, do you want them?’ ” DeMeis said.  “I’d say, ‘Of course I do’ and they would mail them to me. I got so much stuff from friends.”

It’s tough to put a price tag on the entire collection, but a dedicated 40 years of collecting is priceless to DeMeis.

“I retired about seven years ago and I went crazy wanting something to do,” he said. “So I built all these shelves and put it all together. Although it may be a lot in overall value, I didn’t pay a whole lot for it and it worked out really great.”