In fact, she began caring for animals in Philadelphia about a decade before the first American football match was played in 1869 between Princeton and Rutgers Universities and more than 100 years before the Green Bay Packers and Kansas City Chiefs clashed in Super Bowl I.

All these years later, football and animal rescues are running hand in hand in Philadelphia.

On Feb. 13, Morris Animal Refuge will invade the Devil’s Den at 1148 S. 11th St. for a Puppy Bowl Watch Party, which is an annual show dedicated to adorable K9s prior to the biggest football game of the year.

Morris Animal Refuge will be bringing adoptable dogs in hopes of finding their forever homes, while raising money for one of the oldest animal shelters in the country. As legend has it, Morris began caring for animals in 1858 and the Morris Animal Refuge was officially established on 10th Street in 1874 before moving to its current location at 1242 Lombard St. It is coming up on its 150th anniversary in just a couple of years and remains one of the busiest shelters around.

“We’ve been around since 1874 and we adopt out about 1,200 animals a year or 100 a month,” said Grace Erikson, community engagement coordinator at Morris. “We intake animals as owner surrenders and we take in strays but we also pull animals from local city shelters.”

A few of those surrendered animals will be on hand at the event, including Thor, who is a 4-month-old pit bull mix.

“He came to us about a month ago,” Erikson said. “He was surrendered to Morris Animal Refuge because their (other) dog had a litter of puppies and unfortunately they weren’t prepared to take him on so we offered to take the puppy in and get him neutered and vaccinated and now he’s in his foster home just waiting for his forever home. Hopefully he’ll get adopted that day.”

Other dogs like Leo, a Jack Russell Terrier mix, and several others will be looking for a new home. The event takes place from 2-5 p.m. and guests can enjoy a wide variety of themed snacks and craft beer during Puppy Bowl XVII.

SweetWater Brewing Company and Left Hand Brewing Company will offer raffle baskets full of swag for folks to win, with all proceeds from the raffle benefiting Morris Animal Refuge. Guests can buy one ticket for $2, three tickets for $5, or an arm’s length of tickets for $20.

The event is a growing tradition at the Devil’s Den.

“A few years ago Morris had a puppy in the Puppy Bowl and was looking to run a watch party and they were able to bring the puppy with them and it was such a fun and energetic event,” said Erin Wallace, owner of Devil’s Den. “The Devil’s Den has always been a neighborhood place where you can watch the game while enjoying good food and drinks and with Puppy Bowl we can add puppies into that mix and support a local organization like Morris at the same time. So it’s a win-win for us, sports, puppies, great food and drinks all while raising money for a great cause.” 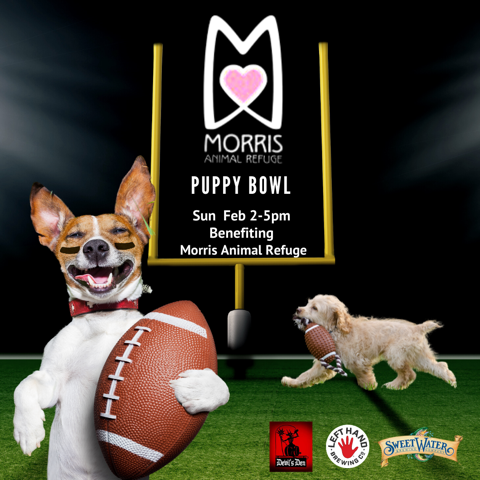 Even those who don’t have room for a new pet can help the mission. Attendees can donate $5 for a cuddle session and a photo opportunity with Thor or any of the other pups.

Devil’s Den will also donate $1 per SweetWater and Left Hand beer purchased and 10% of food sales to Morris Animal Refuge. Masks and proof of vaccination will be required.

“Devil’s Den is a great partner and we just bring a couple puppies over, and it’s a fun pregame to the Super Bowl,” Erikson said.

The Puppy Bowl Watch Party is a prelude to the refuge’s largest fundraiser of the year, the Silver Fur Ball, in which the organization will hope to raise $100,000 at its gala. Last year the event was held virtually.

“Fingers crossed that this year it will be in person,” Erikson said. “It’s a really big event where we have 300-400 people there and have live auction and raffle items but it’s a really great event where we raise a lot of money for the shelter. Our goal is to raise $100,000 just at the gala.”

It’s all part of keeping Elizabeth Morris’ mission afloat. The lifesaving organization offers innovative and high-quality care for cats, dogs and other small animals and provides a full range of preventive, protective and adoption services for abused, neglected and abandoned animals in the Philadelphia region. Morris Animal Refuge had a 98 percent save rate in 2021, meaning less than 2 percent of the animals it took in had to be euthanized.

“We definitely made a name for ourselves,” Erikson said. “Not only do we adopt out and take in animals but we have great programs where people can bring in community cats and we’ll spay and neuter them. We also do free clinics and give out food to them. We just really want to be a member of the community and give them resources so they never have to surrender their animals.”