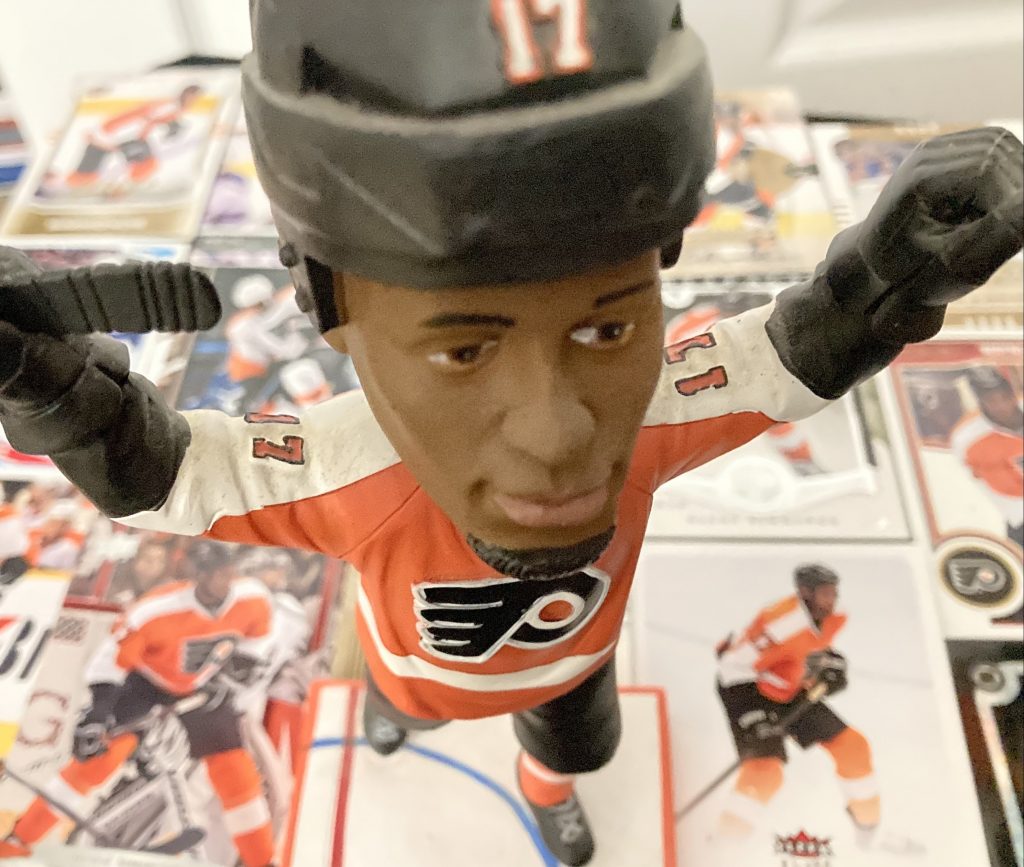 One of the most beloved players to wear a Flyers jersey, Simmonds’ big night was well earned for several reasons. Primarily, hockey players who emulate Simmonds’ rough-and-tumble power forward style rarely reach 1,000 National Hockey League games based on the bruises their bodies encounter over the years.

Flyers fans certainly miss watching Simmonds use his net-front presence to score clutch power play goals and drop his mitts when the team needed a spark. It’s what made the original trade for Mike Richards seem palatable after the Flyers shook things up in 2011 by sending their former captain to Los Angeles for Simmonds and Brayden Schenn.

You can argue for hours whether it was a good trade. But we can all agree it at least moved the needle in excitement and then-general manager Paul Holmgren knew how to move assets before they went stale. Sometimes, you could argue, even prematurely.

But in Simmonds’ case, the Flyers moved too slow when it was time to move on. Simmonds’ peak value was in 2017, as he was the MVP of the All-Star Game and coming off back-to-back 30-goal seasons. He was turning 29 that summer and the Flyers had missed the playoffs. And Simmonds had two years remaining on a friendly contract that was just shy of a $4 million annual cap hit.

The Flyers hung on.

The next season, he slipped to 46 points in 75 games but the Flyers made the playoffs. Perhaps hoping to continue that ride, the Flyers again held on for Simmonds’ final year of his contract — one that he would score just 16 goals and 11 assists in 62 games as a pending unrestricted free agent leading up to the trade deadline. The Flyers, who were out of contention, had their hand forced, and dealt Simmonds to the Nashville Predators. The Flyers received Ryan Hartman and a 2020 fourth-round pick that was traded to the Anaheim Ducks for Derek Grant.

Hartman played just 19 games here and collected two goals and four assists. He was flipped that offseason for Tyler Pitlick. Pitlick played one season in Philly and walked in free agency.  Grant, too, left as an unrestricted free agent.

To catch everyone up, Hartman has scored 22 goals this season, albeit receiving a boost by playing with superstar Kirill Kaprizov in Minnesota. Grant has contributed 15 points in 50 games in Anaheim this year and Pitlick has two points in 25 games, but has been on the shelf with an injury with the Montreal Canadiens.

The Flyers have nothing left to show for Wayne Simmonds besides the great memories he left here. Simmonds played 584 games as a Flyer, scored 203 goals and 175 assists and racked up  784 penalty minutes.

The Flyers mismanaged their assets along the way and basically let Simmonds walk away for nothing. They also failed to replace the grit and determination he brought to the rink every night — the kind that allows you to play more than a thousand games in the NHL.