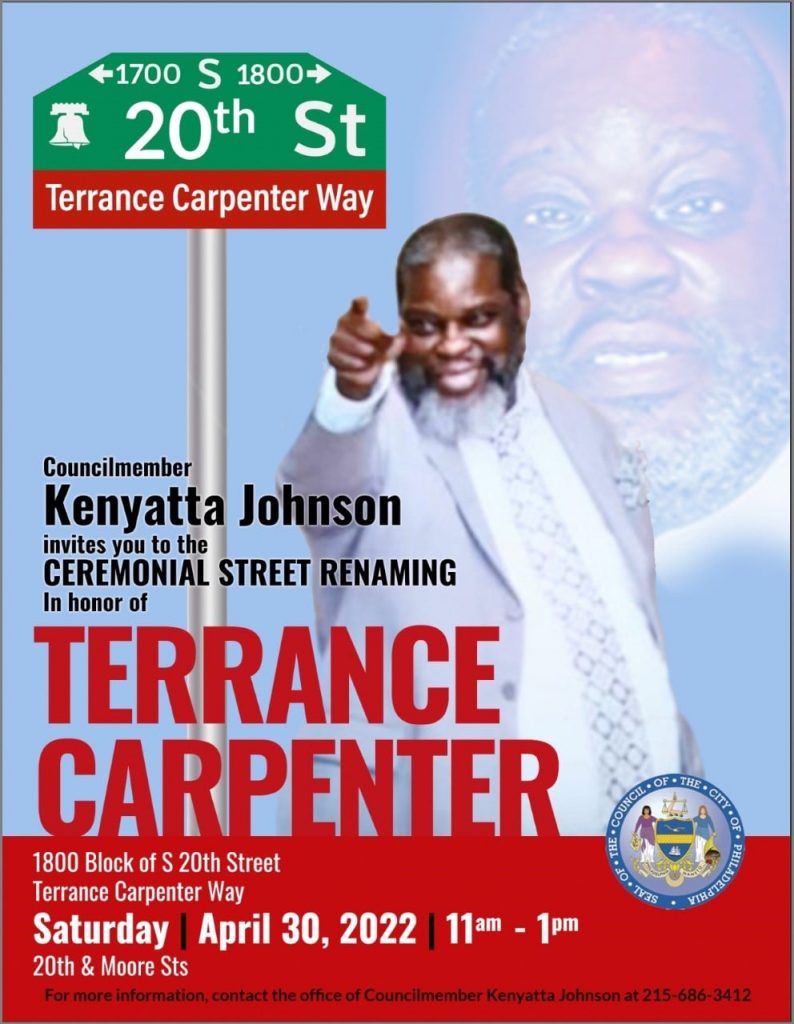 “Mr. Carpenter was a legend in South Philadelphia,” Johnson said. “He was known to many as the unofficial ‘mayor of South Philadelphia’ and his unforgettable presence has been sorely missed and will continue to be so. It is important to salute people for the great work they have done to improve the quality of life in Philadelphia and the ceremonial renaming of the 1800 Block of 20th Street ‘Terrance Carpenter Way’ is a perfect tribute to Mr. Carpenter and his legacy.”

Carpenter was a lifelong resident of South Philadelphia, where he graduated from South Philadelphia High School. His service to the community took many forms. He was employed at the Philadelphia Parking Authority, and then the Crisis Intervention Network, before eventually establishing T. Wayne Associates, a consulting firm specializing in political and community consulting.

Carpenter was a great advocate for the young people of South Philadelphia. Through his work at the Crisis Intervention Network, he had an opportunity to address gang violence by connecting with youth on a personal level and steering them onto better paths. He was also known throughout his community for his civic and artistic pursuits. He served as a commander of the Sons of the American Legion from 2005 to 2006. He also was a well-known disc jockey.

Carpenter’s talents also shined in his role as a committeeman for the 48th Ward, 32nd Division. He served as the treasurer of the 48th Ward, where he handled the financial decisions and was the unofficial “Keeper of the Ward.” He had a towering presence in his neighborhood and was sometimes even called “the mayor of South Philly.”