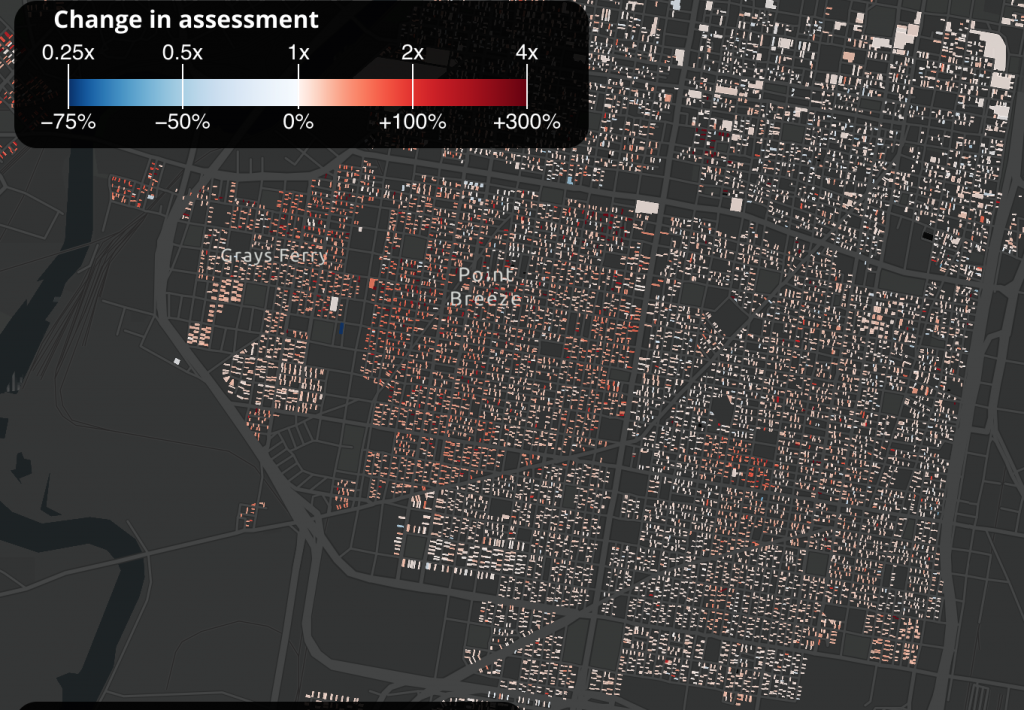 Several areas of South Philadelphia could see significant increases to their property taxes due to the city’s latest reassessment, which will go in effect for 2023.

The City of Philadelphia released updated assessed values for all properties in the city on May 9. Residents can find the value of their home at https://property.phila.gov/, which could help them prepare for a major increase on their tax bill.

Also available is an interactive heat map of publicly available data on the Office of the City Controller’s website where residents can explore comparable values in their neighborhoods. It includes the percentage of increase from tax year 2022 after clicking on a property. The map includes only single-family residences.

The map can be found directly at https://controller.phila.gov/philadelphia-audits/tax-year-2023-assessment-changes/.

“We hope that this map will be used as a tool by City Council and residents alike to understand trends in assessed value changes and bring much-needed transparency to the reassessment process,” said City Controller Rebecca Rhynhart. “Philadelphians deserve an accurate, predictable and transparent property assessment system and a fair taxation system.”

The city’s last reassessment came in 2019, when property values increased about 10 percent on average citywide. This round of reassessments yielded an average of a 31-percent median increase for properties classified as single family residences.

The initial review conducted by the Controller’s Office noted that the largest percent increases are concentrated in parts of North Philadelphia, West Philadelphia and South Philadelphia. Locally, areas west of Broad Street that are seeing gentrification including Point Breeze and Grays Ferry got hit the hardest.

“When we looked at property assessments in 2019, we found that our poorest neighborhoods had the worst assessments – our most vulnerable residents were paying more than their fair share of property taxes, compared to wealthier neighborhoods,” Rhynhart said. “At this point, the Office of Property Assessment has not released its methodology or data to show these earlier issues were addressed. While it is possible that there are large increases in assessed values for tax year 2023, it is unlikely that the market changes over the last three years alone account for the doubling of assessed values in certain parts of the city. Couple that with the opaque process and inconsistencies in land valuation and one thing is clear: The reassessment process needs to be better.”

Property owners not satisfied with the assessment on their homes can apply for Homestead Tax Exemption and get a first-level review. If declined, then they can file a formal appeal to the Board of Revision of Taxes, which is due on Oct. 3.