A South Philly playwright is a Pulitzer Prize winner.

James Ijames won the 2022 Pulitzer Prize for Drama for his play Fat Ham, which transposes “Hamlet” to a family barbecue in the American South to grapple with questions of identity, kinship, responsibility and honesty.

Ijames, who has a deep local history as a member at large of Azuka Theatre’s New Pages playwriting organization, utilized the Azuka to fine-tune his award-winning work. He is also an Associate Professor of Theatre at Villanova University and a co-artistic of the Wilma Theater.

”I’m grateful for the loving development and support I’ve been given by Azuka and specifically the role they played in the development of Fat Ham,” said Ijames.

Fat Ham debuted at an in-house reading with Azuka for the first full script in 2019, and it hosted a public reading for the play in February 2020.

“Sharing space with James is always a privilege and a delight, and I couldn’t be more thrilled that his brilliant, passionate work has gotten this tremendous recognition,” said former artistic associate Maura Krause. “The first time James brought in scenes from Fat Ham, we read them within the group. Even a bunch of non-actor writers reading couldn’t dim the luminous words on the page, and we were left breathlessly awaiting more. When we did an in-house reading of a full draft of Fat Ham with actors a few months later, everyone present was mesmerized by the heartfelt yet subversive genius of the script. Getting to support James as he developed this profoundly meaningful and aesthetically dazzling play was a true honor. Since that first reading in Azuka’s conference room, I’ve hoped Fat Ham gets produced absolutely everywhere. The world needs it.”

While the world waits for that production to make the rounds worldwide, Ijames is showing another play Reverie at Azuka, which runs through May 22 at the Proscenium Theatre at The Drake at 302 S. Hicks St. The show is directed by Jerrell L. Henderson.

“We are thrilled for James and his remarkable achievement,” said Azuka Theatre’s Co-Artistic Director Rebecca May Flowers. “Each and every one of his plays is thoughtful, funny and profound in its own right. The same is true for his lovely play Reverie.” 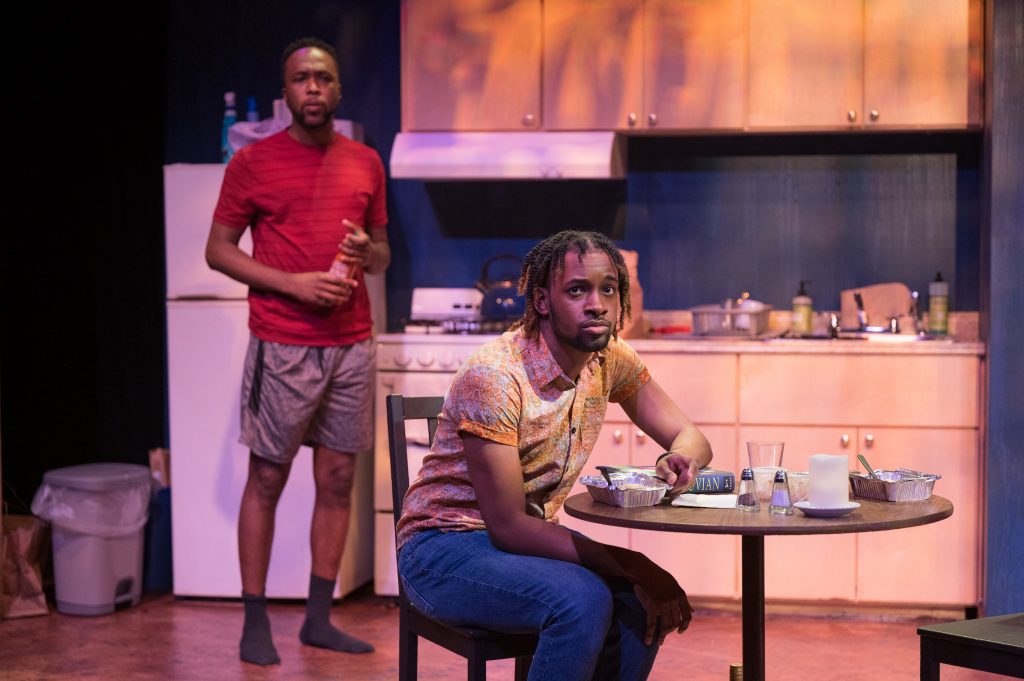 The story deals with grief, being true to yourself and the family dynamics that can make that so challenging. When Jordan answers a knock at his door, he’s expecting to see his most recent assignation standing there, but instead encounters Paul, the father of a former boyfriend. Paul’s son Lucas died six months ago, and Paul found Jordan’s address amongst his son’s belongings.

“James Ijames is an amazing and heartfelt storyteller,” said Reva Stover, Azuka Theatre’s co-artistic director. “It is no surprise that his work has risen to this level of success, and we know it will only continue to grow. James’s relationship with Azuka and New Pages has only made this moment sweeter as we have the honor of producing another of his brilliant plays, Reverie, through May 22 at Azuka Theatre. We can’t wait to see what story he tells next.”

Azuka Theatre’s writers group was created to give local playwrights like Ijames a writer-centric space to develop their work. New Pages attempts to support Philadelphia playwrights from the spark of an idea to a production-ready script. Azuka Theatre has committed to producing at least one play per season by a writer from this group. New Pages hopes to foster playwrights as they build full bodies of work and deepen their roots in this city.

“The journey that James has been on as a playwright was always charted in this direction — success, recognition and well-deserved accolades,” said Azuka Theatre’s Resident Dramaturg for New Pages Quinn Eli. “His voice has always thrilled us here in Philly, and more and more the world is learning of his unique ability to share wisdom and lift spirits. In all of James’s work, including Reverie, the greatest award is being reminded of the humanity that connects us all.”

Reservations for Reverie can be made at https://www.azukatheatre.org/reverie or call 215-563-1100. The show is part of the pay-what-you-decide box office initiative. No money is exchanged in advance for tickets to Reverie to ensure that shows are accessible to the public.

“We’re overjoyed to see James receive this incredible honor,” said Azuka Theatre Executive Director Kevin Glaccum. “We’ve been fans of his for a long time, and are happy we could play a small part in his success. Azuka has done readings of two of James’ plays, By and By and Fat Ham along with our current production of Reverie. James’ work is smart, funny and wonderfully human. Now the country will discover what Philadelphia has known for a while, James Ijames is a treasure.”