A crossroads at a coffee shop planted the seed for Miss Cantaloupe.

The five-piece local band, hailing mostly from South Philly, can thank its continued success to a gutsy venture dreamed up by lead vocalist Christina Klaproth while waiting in line for coffee at the former Leota’s Place (now Franny Lou’s Porch) on Coral Street in Port Richmond.

Klaproth had been working on a music project at a nearby studio and noticed Sean Youngman, who was working on a separate project with a different band. When she overheard Youngman at the coffee shop say he was looking for an electric acoustic bass guitar, Klaproth saw an opportunity.

“She overheard me talking about (the bass) and she decided to find a way to slide into my DMs and tell me she had one for sale,” Youngman said. “Which actually wasn’t true at all.”

Klaproth had set up a trade without the main piece of the deal.

“I lied,” Klaproth said with a laugh. “I told him I would trade him the bass for a Djembe (drum). He came over with a Djembe that he had found in a pawn shop. But I never had the bass. I wasn’t that cool.”

The deal-gone-wrong did lead to an exchange of phone numbers and the two have been dating the last eight and a half years and now live together in South Philly. About six years ago, the Miss Cantaloupe music adventure began.

“A friend of mine and I were just playing some music together and Sean encouraged us that we should do something with it,” Klaproth said. “So we just kind of started messing around. Then Sean joined in. He got me into some really good music and he actually taught me guitar. I had already been a songwriter but struggling to find my voice. And then the guitar just helped me open it up and I’ve been songwriting ever since.”

The band has morphed members through the years, but has settled on a quintet that consists of Klaproth (guitar/lead vocals), Youngman (drums), Coco Brewer (bass, vocals), Bexx Rosenbloom (cello, percussion, vocals) and Joey Catrambone (flute). Brewer and Catrambone are also South Philly residents while Rosenbloom lives in Westville, New Jersey and runs a produce stand at Rosenbloom Farm.

And when the pandemic prevented so many other music acts in their tracks, Miss Cantaloupe kicked down the doors with creativity. After its self-titled EP released in 2017, the band was gaining momentum, collecting fans during live shows while recording more original music as the calendar flipped to 2020. Then the world changed.

“It slowed us down, for sure,” said Youngman, who has lived in South Philly the last 11 years. “We had a record ready to go, then COVID struck. So we said let’s sit tight, let’s take a look at these songs and make a bunch of music videos since everyone is at home on their computers anyway.”

Unable to perform due to restricted gatherings during the pandemic, the band pivoted and began producing polished productions for its catchy tunes like “Paradigm Shift,” “Flowers, Flowers” and “Come to Us.”

Directed by James O’Brien at Arsenal Mediaworks at the BOK Building, the video for “Paradigm Shift” is a ‘70s-style vibe that follows Klaproth’s motorcycle down South Philly’s Dickinson Street and visits streets underneath the El in Fishtown before reaching a mystery destination.

Finding great success with its visual productions, the band decided on something a little different for its sixth single from its 2021 full-length album Beets Began to Rise.

“He is a friend from high school’s little cousin,” Klaproth said. “He goes to NYU and he’s killing it. He’s blown my mind with what he’s done. He comes from an artistic family and his standard and detail and creativity.”

Claymation typically takes hundreds of shots for just a few seconds of video. It’s not cheap, easy or fast, but the video is a beautifully created visual journey that blends perfectly to the soft soothing sounds of the song.

“Developing and producing the music video for ‘Don’t Go Little Doe’ was a labor of love done over the course of two years during the pandemic,” Fargiano said. “The film was created using stop-motion animation, and contains over 3,600 photographs of hand-sculpted sets, characters and visual effects. It’s a classic, one-of-a-kind process that can create either extremely charming or deeply disturbing imagery, which was a perfect blend for Miss Cantaloupe’s tale of the natural world.”

The band gave Fargiano free rein to create the video and together they settled on the direction of the project. Two former band members, Sam Gutman (keys/arrangements) and Steph Pez (backing vocals/glockenspiel), also contributed to the song.

“It was a collaboration,” Youngman said. “We explained to (Fargiano) what the song was about and what we had in mind and he gave us three options of what he could do. We chose the most extravagant one. It ended up being a very long process but we’re very happy with the end result.”

The videos accompanying a wonderful collection of music gave the band new inspiration during a time when it was tough to forge forward.

“It’s been a really good outlet for us during the pandemic when we couldn’t perform, although it’s us spending money rather than going out and making money,” Klaproth said.

With the music scene returning to normal, Miss Cantaloupe is hoping to get back to normal, playing live shows that include costumes, theatrical performances and props. The band has an upcoming matinee house show on Aug. 7 and a new live EP is on the way, followed by a supporting East Coast Tour.

“We keep working hard at it, playing a lot of festivals in the tri-state area of festivals summer after summer,” Youngman said.

Klaproth said it took some maturing to get where she is. A decade ago was a time of hosting monthly house parties at 4th and Berks in Kensington, which she described as “incredible music and debauchery,” saying, “It took a whole month to clean the house gearing up for the next party.”

After the landlord refused to renew the lease, Klaproth decided to shift gears. Aside from her performing career, she teaches parent/child music classes around the Philadelphia area and teaches Saturday mornings at Little City Activity Center with the hopes of starting an edu-tainment children’s show. 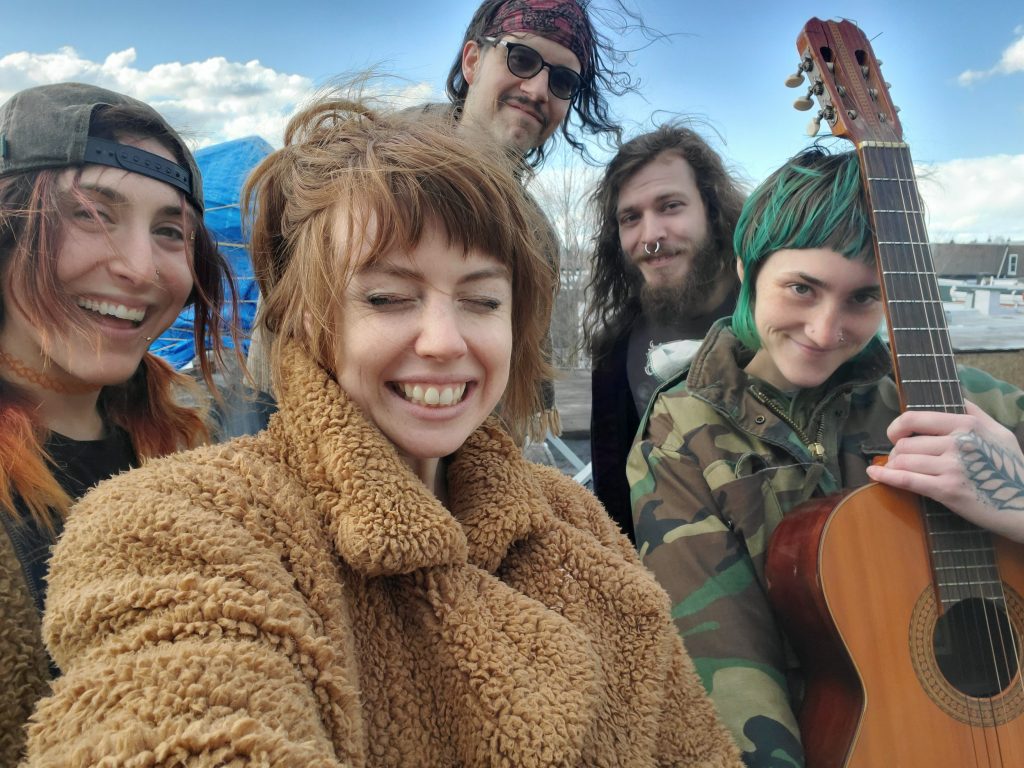 “It took a lot of maturing to grow into the adult I am today who chooses staying home and songwriting over going out, weekly band practices over anything else going on,” said Klaproth, now 31. “But I try to trust that everything is in its right place. Success has no age. I’m excited about our music and that’s a really thrilling place to be. I remind myself a lot how blessed I am to do what I love, sing and write songs, work with badass musicians, weave stories and create vibes to share with others.”

It takes a lot of people wearing multiple hats to make Miss Cantaloupe a success. From band members, to video creators, sound technicians and so on. And, of course, the failed instrument swap at a Port Richmond coffee shop nearly a decade ago.

“I can’t stress how important it is to have a supportive team,” Klaproth said. “Breathing a song to life is a multifaceted process and it requires a lot of specialists, whether it be musicians or sound engineers or music video directors to understand the vision and sculpt it into a shared experience.”