How could a man who stole one of the most famous paintings in the world still be a mystery more than 100 years later?

It was the question that South Philly filmmakers Joe Medeiros and Justine Mestichelli Medeiros promised to answer after years of extensive research and interviews. They knew who did it. That was the easy part. But the couple, who now lives in California, needed to unmask exactly why Italian immigrant Vincenzo Peruggia somehow walked out of the Louvre Museum in Paris in 1911 with the Mona Lisa and kept it hidden in his French apartment for two and a half years.

It’s all detailed in an award-winning documentary called Mona Lisa is Missing that was shown at various festivals and private viewings, but it is finally set to air on public television on Aug. 28 at 6 p.m. on WHYY Philadelphia.

Not many people know the truth behind one of the most significant art heists in history and how Peruggia indirectly helped make a significant, but not overly popular painting at the time, into arguably the most famous one in the world.

“People might know about it but there are a lot of other art thefts,” said Joe Medeiros, who was born near 6th and South streets and was the former head writer for the Tonight Show with Jay Leno. “This, to me, was the most important. And really nobody cared about the man who stole it. He was a nonentity. But once I met his daughter, I wanted to tell the story about the man. Why would somebody do this? Was he a criminal? Was he crazy? Was he a nationalistic patriot?”

All those questions are answered in the 56-minute documentary, written and directed by Joe Medeiros and produced by Justine Mestichelli Medeiros, which interviews A-list art experts and curators and unearths thousands of documents from the French and Italian National Archives.

The project began innocently enough when Justine bought Joe a book about Leonardo da Vinci, who created the masterpiece painting during the Italian Renaissance. The two had met in Wildwood, New Jersey in 1973. Joe, a musician at the time, was playing the local night club scene while Justine was working at Uncle Lou’s Pancake House at the shore. They met at the former Oasis bar and were married less than a year later and spent the summer of ‘74 traveling to Europe, visiting numerous art museums.

Justine gave Joe the art book a few years later but it included merely one line stating that the Mona Lisa had been stolen. Curiosity took over for the aspiring film creators.

“I was a recent graduate of Temple (University) and wanted to be a screenwriter, and I thought, here it is,” Joe recalled. “This is my screenplay idea so I started doing the research on it. I tried to write a script but there wasn’t that much information here in America at the time. And I don’t speak either French or Italian, so there was no way for me to get the story so I never finished the script.”

They pivoted to the idea of a documentary when they learned Peruggia’s daughter, Celestina, was still alive in Northern Italy. Celestina, herself, was looking for answers as her father passed away when she was a young girl. Joe and Justine almost immediately booked a flight to Italy, as Celestina was 84 at the time and her health was fading.

“There was a lot of kismet involved in this project,” Justine said. “Celestina had a heart condition. We had no time to think whether we could do this or not. Then it was a layering of people who knew people that got involved so willingly to volunteer because we had no budget.”

The couple had been making short films with their production company, Midair Rose Productions. Justine’s extensive experience in film production and ability to set up crucial interviews fueled the journey.

“We’re pretty tenacious like South Philadelphians are,” said Justine, a Saint Maria Goretti graduate who grew up on Sartain Street in East Passyunk. “We get the job done one way or another. But when we met Celestina, we were walking into our South Philly Italian cultural heritage. We knew this family. It wasn’t like we were coming in like a bunch of Hollywood filmmakers. We were Italians.”

It still left plenty of challenges. Most sought-after interviews spoke foreign languages, and important documents were written in French and Italian. Friends were made. Favors were asked.

“The challenge for me was to get us everywhere we needed to go,” said Justine. “We had to get into the Louvre and the Italian National Archives and we had to interview A-list people in the art industry. We needed credibility with the information that we were armed with. We knew more about this subject through our research than the curators of the Mona Lisa at the Louvre.”

Joe and Justine called on friends and colleagues to help them move forward in securing interviews and documents to help solve the puzzle of why Peruggia stole the famous painting and how he did it. Their research went deep, digging up incredible detail on Perrugia’s health, background and motive for swiping the Mona Lisa. They also received good fortune in finding Peruggia’s apartment and jail cell.

“We had a lot of really good luck,” Justine said. “It’s like there was something around that gave us these spontaneous little treasures that we were able to put in the film.”

The documentary officially started in 2008 in anticipation of release in 2011 for the 100th anniversary of the heist. But more details emerged. A longer 86-minute full-length documentary exists. But the scaled-down made-for-TV 56-minute version is perfect for light viewing on a historically important topic. 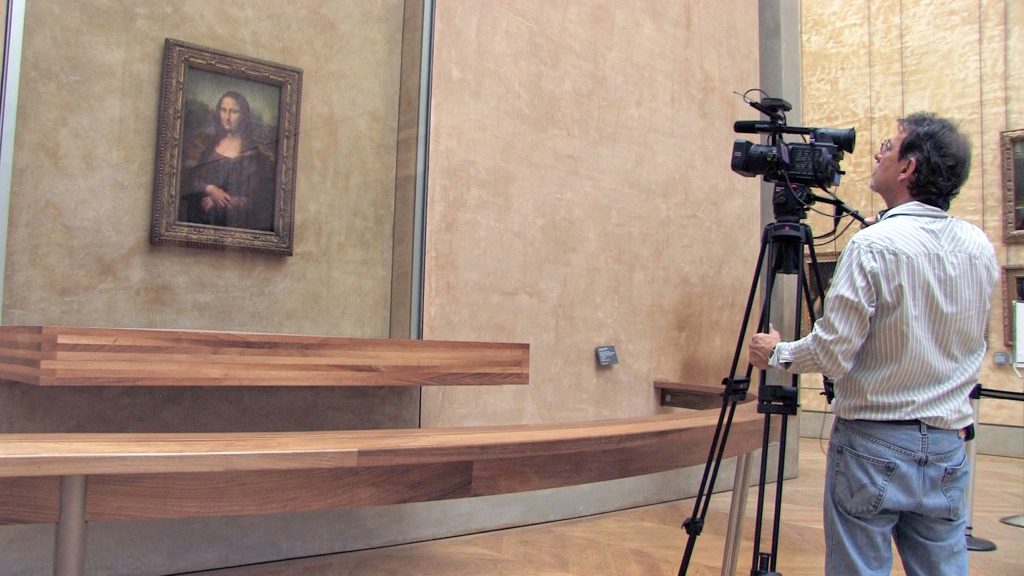 “At WHYY, we’re always on the hunt for interesting and entertaining programs that showcase local filmmakers or those with ties to our community,” said Betsy Braun, Director of Programming, WHYY. “Mona Lisa is Missing takes it one step further telling the story of the heist of one of the most famous art icons in history in a creative and humorous way. We’re excited to bring this film to our audience.”

Joe and Justine jokingly say it’s the most expensive and most elaborate home movie ever made. But they found great satisfaction in documenting Peruggia’s story and bringing a bit of closure to his family members.

“It’s a story about a person and an extraordinary thing that happened to him, but it wasn’t extraordinary for him at the time,” Joe said. “I don’t think he really realized what he had done. He made this painting of a not-so-attractive woman become one of the most famous paintings of all time.”