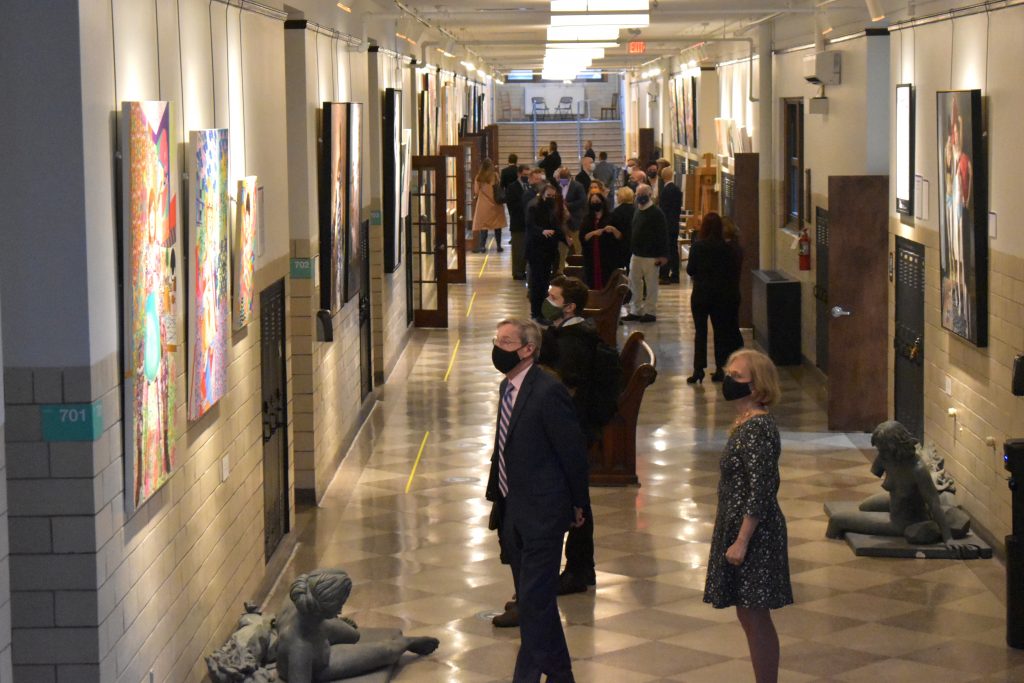 For 20 years, students at Studio Incamminati have had the opportunity to form their creative excellence and master their technique from a unique curriculum that can only be found in one place.

Studio Incamminati originated in October 2002 in Philadelphia when Nelson and Leona Shanks established the private school for contemporary and realist art at 12th and Callowhill streets. Two years ago, just shy of its 18th birthday, the school moved to the Bok Building at 9th and Mifflin streets and now occupies the entire 7th floor with classrooms, galleries and workshops.

Now, about to turn 20, Studio Incamminati will hold a Founders Day Gala on Oct. 1 to celebrate two decades of artistic achievements, while raising money to continue its mission of producing highly skilled artists who can create art with depth of purpose.

The school’s teachings dive centuries into the past to learn how artists as far back as the Renaissance created their masterpieces.

“It’s given me invaluable insight into my understanding of what artists were doing 400 years ago,” said Executive Director Sheila Barker, who recently joined the school. “I couldn’t have understood the challenges of 17th-century artists without being here today in this school, watching the present-day artists struggle with the complexity of the human form and the phenomenon of light changing from second to second. I could not have understood that from a book or from words. I’m 51 years old and have read a lot of books and it wasn’t until I was here in person that I understood.”

Barker is the first female executive director at Studio Incamminati and she said the uniqueness of the school is what makes it such a gem in the local community.

“If students don’t have the ability to learn from a teacher, and be in the classroom with a live model and a teacher and get the instruction, there’s no way that they can comprehend it from a YouTube video or a book that they buy at the store,” said Barker, who was the longtime head of the Jane Fortune Research Program on Women Artists at the Medici Archive Project in Florence, Italy. “This school is a beacon. It’s a really special place where this magical process of turning our everyday realities into art that we love and care about. This alchemy happening here, it’s something these students have to pass down to their students from person to person. It’s a really humanistic enterprise centered on human values.”

There will be a VIP cocktail party from 5:30-6:30 p.m. followed by a gala from 6:30-9:30 p.m. The guest speaker will be actor, director and artist Federico Castelluccio. Castelluccio is perhaps best known for his portrayal of formidable Neapolitan enforcer Furio Giunta on the HBO hit series The Sopranos. Castelluccio is a member of Studio Incamminati’s Board of Directors. More recently, he has worked as a director for both television and film, directing the feature film The Brooklyn Banker in 2016 and the TV pilot Outcall in 2017.

Student Michael Ballezzi, who won best in show at Rittenhouse Square Fine Arts Show, will have his work on display. He will be joined by several other talented artists who will have their work on display and up for sale.

“It’s never going to be cheaper than now because these people are going to get more and more famous,” Barker said.

You can also watch some of the artists at work that night.

“There will also be an auction of paintings being made during the event with a live model,” Barker said. “You can watch those emerging on the canvases of three different artist instructors  and make bids. That’s going to be a fun part.”

Tickets can be purchased at https://studioincamminatigala.brownpapertickets.com. Guests aren’t the only ones excited for the event to begin.

“It’ll be great conversations and great festivity,” Barker said. “It’s also a chance to thank the people who have supported us over the last 20 years and look ahead to the future.”