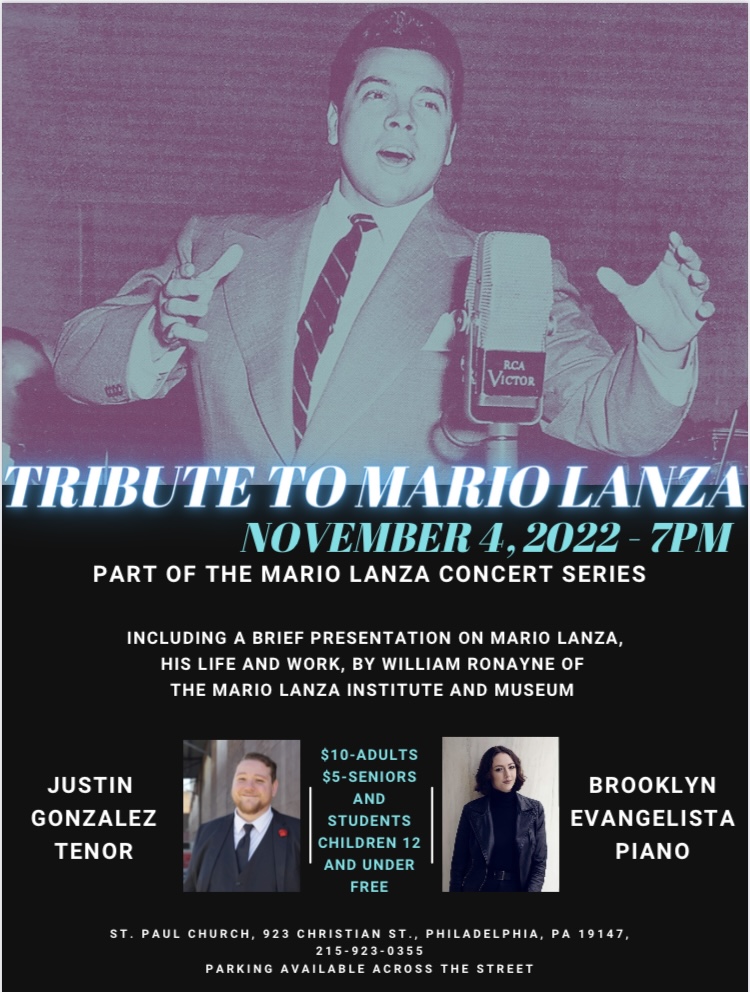 The songs of the great South Philly tenor Mario Lanza will be on display as part of a new concert series at St. Paul Church in the Italian Market.

The church, located at 923 Christian St., not far from where Lanza lived, will pay tribute to the singer on Nov. 4 at 7 p.m. as a “Tribute to Mario Lanza” as part of an ongoing concert series.

Tenor Justin Gonzalez will portray Lanza’s voice while Brooklyn Evangelista will play the piano. Evangelista is a South Philly resident and the director of music at the church, playing organ and piano at weekend masses.

Lanza’s voice was an easy choice to honor for the series.

“The reason we chose his name for the whole series is he was a parishioner of St. Mary’s,” said Evangelista. “He famously sang Ave Maria from the second-floor balcony. They had his funeral there. He was born on Christian Street. The name made sense because we wanted to dedicate at the concert and feature local Philadelphia talent and he was local Philadelphia talent.”

The Nov. 4 concert will begin with a 20-minute informational session provided by Bill Ronayne of the Mario Lanza Institute and Museum, which is located nearby at 1214 Reed St. It will catch guests up on Lanza’s life and significance not only in Philadelphia, but across the world.

“I’m a believer that the reason people don’t understand classical music is because they literally don’t get where it came from or what its purpose is,” Evangelista said. “I like lecture recitals because people can learn and that just helps their listening.”

The lecture will be followed by about 40 minutes of singing by Gonzalez, singing Lanza’s songs from his MGM movies and into some opera. Tickets are $10 for adults and $5 for seniors. Children under 12 are free. Call 215-923-0355 for tickets. There is free parking available across the street.

“People love Mario Lanza,” Evangelista said. “They are proud of him locally because it is a very Italian-American area and they remember him. It’s nice to keep his memories living on because he is so prevalent.”

Guests will be entertained by Evangelista playing the keys and Gonzalez belting out the tunes.

“He’s fantastic,” Evangelista said of Gonzalez. “He truly has the whole package and can sing like no other. When he’s not doing opera, he’s Freddie Mercury in a Queen cover band. When people think of a tenor, he’s your tenor. You’re going to hear all the classics that people will really enjoy.”

Money raised will be used to offset some of the climbing utility bills at the church.

“We have two churches that are not very modern and don’t conserve energy,” Evangelista said. “We are constantly paying heating and cooling and we struggled with the bills on both of them with general maintenance. St. Paul’s is now 179 years old. We’re trying to be creative and create some new revenue streams and this series has always been a dream of mine. I always wanted to do a neighborhood concert series.” 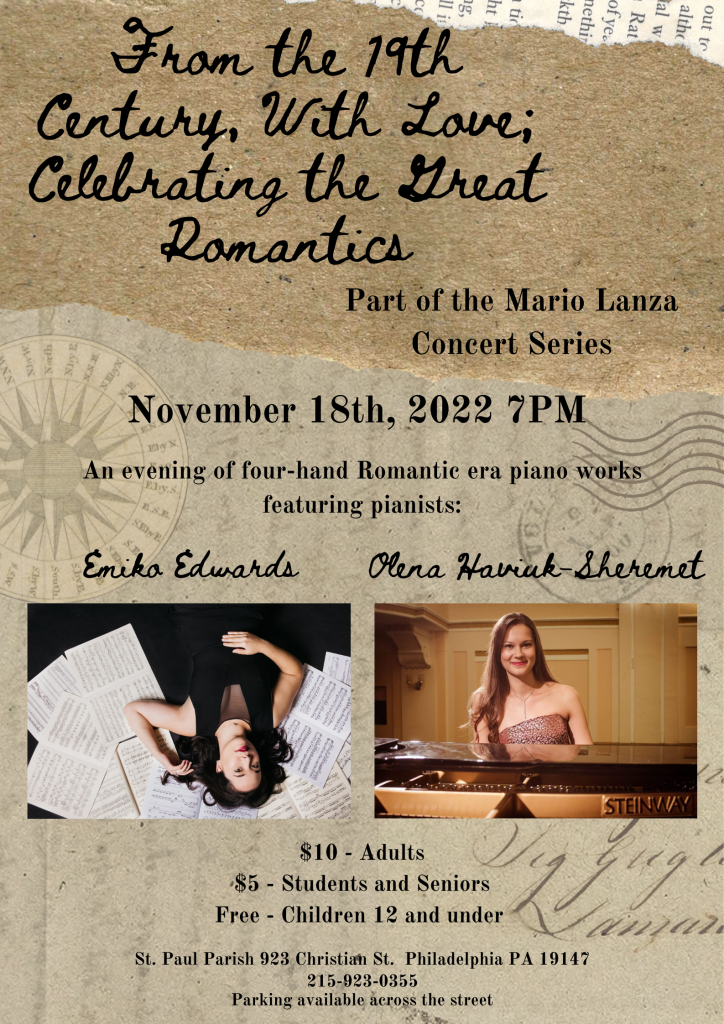 The second part of the series will be Nov. 18 at 7 p.m. celebrating the great romantics, which is a piano four hand featuring Emiko Edwards and Olena Haviuk-Sheremet . The church is planning on more events leading up to Christmas.

The goal is to welcome all people outside the parish with the hope of uniting all of South Philly.

“It’s really meant to bring the South Philadelphia communities together,” Evangelista said. “In particular, the Bella Vista and Italian Market neighborhoods areas but really all over is what we are aiming for.”