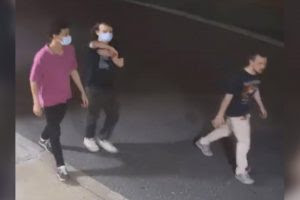 Police are looking for a group of suspects who broke into the Beer Heaven store at 1100 S. Columbus Boulevard on June 12.

According to surveillance video provided by police, a group of three suspects entered the store after one of them threw an object through the glass door at approximately 10 p.m. Another suspect waited on Washington Avenue, police said.

The video shows suspects taking merchandise from the store including alcoholic beverages.

Anyone with information about this crime or these suspects is asked to contact the South Detective Division at 215-686-3013/3014.