Jeffrey Lurie said he wants to use the alternative color in the future.

When Jeffrey Lurie said, as he was about to wrap up his state-of-the-Eagles news conference during the NFL annual meeting in Phoenix in late March, that he would like the team to use the kelly green jerseys as an alternate color in the near future, social media and talk radio lit up like the Fourth of July.

@imawesome said on Twitter, “Kelly green all the way!”

What is it that makes fans feel such a passion for jersey colors? The Eagles have changed theirs several times since the Frankford Yellow Jackets wore the colors of Sweden in 1933 — blue and yellow — but it is the kelly green fascination that fuels so many fans’ interest now.

In 1996, with Lurie in his second full season as the team’s owner, the Eagles moved away from the kelly green and introduced midnight green jerseys to the fans, with a largely popular reaction. The midnight green was bold and innovative, as the Eagles distanced themselves from a kelly green that bore a striking similarity to what the New York Jets wore.

Since then, as the NFL has permitted teams to wear “alternate” jerseys twice in each season, the Eagles have gone with the “Back In Black” look featuring black jerseys and black pants. In 2010, celebrating the 50th anniversary of the 1960 NFL championship team, the Eagles wore that version of green for a game and the fans reacted very favorably.

The Eagles, understanding the fans’ love of the kelly green, introduced a proposal to the NFL that teams be permitted to also change the helmets as part of the alternate jersey. That way, the thinking went, the jerseys and helmets would match, in kelly green, and the fans would enjoy the whole retro look.

“I want to see us use kelly green as an alternate and Thursday night-type of uniform,” Lurie said. “The only thing blocking us (is) we can’t use a kelly green helmet yet. So that’s what we’re waiting for. We’re going to keep pushing at it. The only reason we withdrew is we were told it wasn’t going to pass. But they are all well aware of it. Many teams would like to see this. My hope is we’ll be able to get it done, hopefully by next March.”

What is it about the jersey colors that inspire fans’ emotions so vigorously? Would fans react the same if the Eagles reverted, for a game or two in a season, to the 1970s white jerseys and white helmets and white pants, with the high stripe on the shoulder? Or is it a generational thing? The fans are of the age that they remember the Reggie White and Randall Cunningham days, when Buddy Ryan was the head coach and the Gang Green defense brought back a franchise that was largely DOA in the years after Dick Vermeil stopped coaching here, and there is an emotional tug thinking back to those days.

The Eagles aren’t planning to change their jerseys from the midnight green. They love the colors, and the fans are happy with the look and that’s the way it’s going to be. But Lurie wants kelly green to come back in some capacity, and “the sooner, the better,” he said. That’s exciting to the fans.

The past is part of this team’s present and its future, and any way to connect the years is a win-win for everyone. In the end, which jersey do you prefer: the midnight green of now or the kelly green from the 1980s and ’90s or even the white-on-white look from 55 years ago? Style matters, as the fans have so eloquently stated. SPR 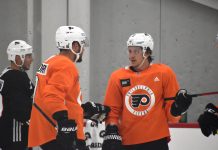