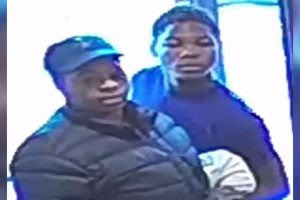 Police in the 3rd District are looking for a pair of suspects who were caught on surveillance video running off with a money jar from the counter of John’s Roast Pork on Snyder Avenue.

The incident occurred on March 4 at approximately 5 p.m. when police say one suspect took the money jar while the other held the door for him. Both fled the scene together, police said.

If anyone has any information about this crime or these suspects, they are asked to contact the South Detective Division: at 215-686-3013/3014.