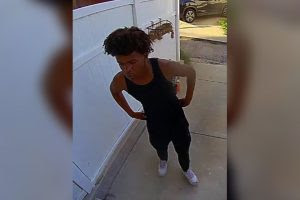 Police are looking for a man involved in an attempted burglary on the 2000 block of Saint Albans Street on June 28.

According to police, an unknown man was caught on surveillance video at approximately 7:30 a.m. attempting to gain entry to a residence on Saint Albans. After he was unable to get in the rear door, he attempted to gain access to another residence where he was confronted by the complainant and fled, police said.