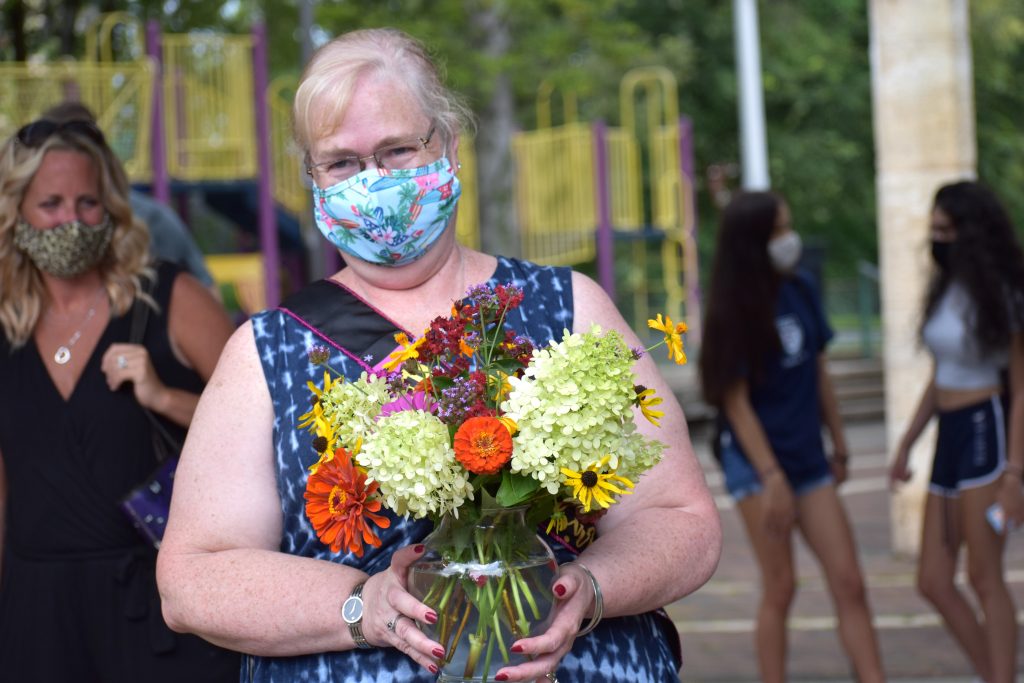 During her commute to work, Judy Crossan-Sanicky never had much time to think about all the great times at William H. Markward Playground.

After all, she’s always been just a hop, skip and a jump away from punching her timecard there, as her nearby home on Pine Street in the Schuylkill section of the city has been in her family’s name for more than half a century. For 40 years, her summer morning commute was a short walk across the narrow street.

“It’s the one right over there,” Crossan-Sanicky said, standing on the front steps of the playground, pointing toward her house. “The one with the flower pots.”

On Aug. 12, Crossan-Sanicky was reminded of all those great times at Markward as she was the guest of honor during a surprise celebration at the playground that she’s loved for so many years. Crossan-Sanicky is officially retiring from her post as Assistant Recreation Leader of the Markward Summer Camp, which she held for the last 40 years. It was a part-time gig during the winter while teaching eighth-grade at St. Mary Interparochial School on Locust Street the last 35 years. The summer camp job would ramp up to full-time hours annually when the school year was through.

Crossan-Sanicky will continue to teach at St. Mary but is moving on from Markward, as she will be moving to Garnet Valley in the near future.

“It was time. But I’ve had some amazing leaders and bosses here,” she said. “The people have been amazing, too. I grew up with a lot of people around here. It’s a great place. It really is. I’m going to miss it.” 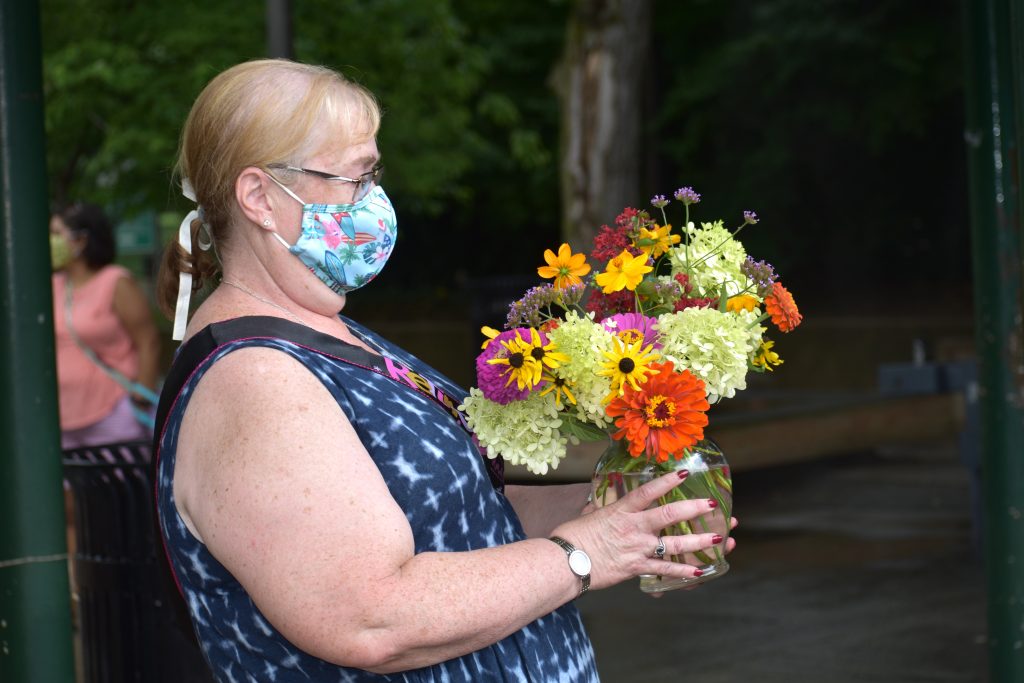 Past campers already miss her. They showed it by making an appearance during the celebration despite a downpour of rain. Lynn Baker said she hasn’t been back to the city in five years. She stopped by Markward Playground to say farewell to her longtime counselor, teacher, boss and friend.

“I came here every summer since I was 2 and a half,” Baker said. “Then I started volunteering for her when I was 13 and then I later worked for her through the city. She was also my teacher at St. Mary’s so we go back a long way.”

Franny Foy has been a maintenance worker at Markward for more than 30 years, laboring side-by-side with Crossan-Sanicky his entire employment there.

“It’s going to be strange because she’s been here most of my life,” Foy said. “Next year, it’s going to be weird for people when they show up for camp and she’s not here. She started this camp with eight kids, and it grew to more than 140.”

Attendance was expectedly down this year as many parents chose to keep their kids at home during the pandemic but the Markward Camp still pressed forward with smaller numbers. Kids still enjoyed a daily dose of movies, activities, homework support, sports and arts and crafts while hunkered down in a safe environment.

The group still made the best of the situation, having lots of fun under new guidelines of wearing masks and social distancing. 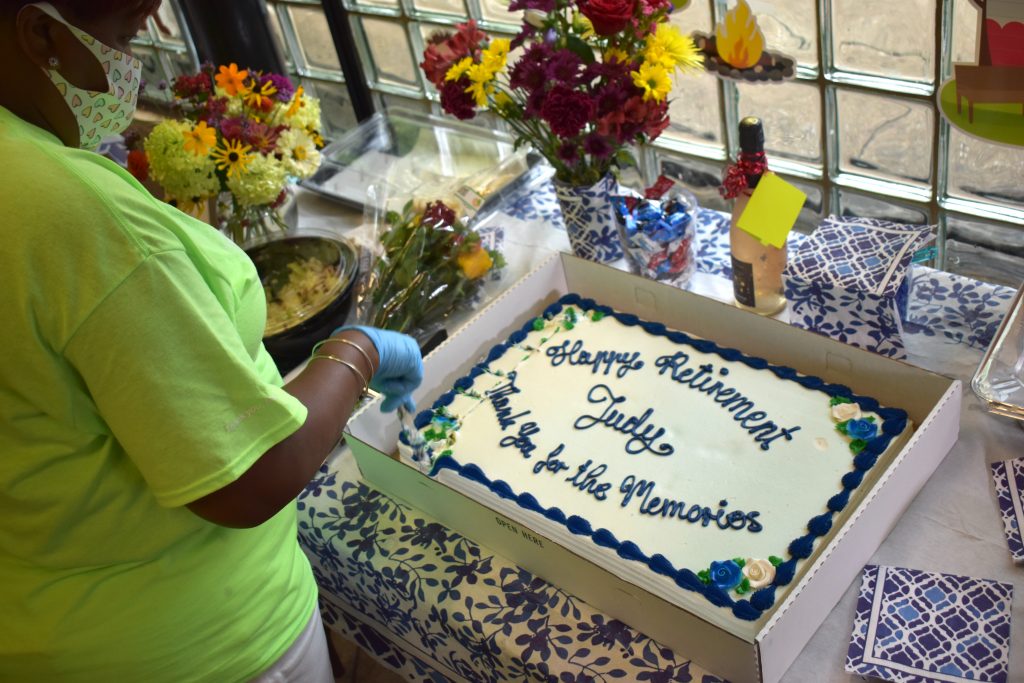 “I wanted to have my last camp this summer and it was different,” Crossan-Sanicky said. “It wasn’t what we were used to. We’re usually triple the size of what we are now. But at least we had something.”

This year was strange. Next year will be even more strange.

“It’s going to be weird without her,” said co-worker Mary Pat Milko. “She’s been here forever and she made this into a great camp. Most of the kids that came as campers loved it so much that after they came here, ended up working here later. They knew what to expect of her. And a lot of them were her students, too. They knew what she was like and they loved growing up with her.”

They came back to work for her. And they came back to say goodbye. A steady stream of past campers, counselors and employees didn’t want to have Crossan-Sanicky’s sendoff to be a quiet one.

“People have been coming here so long that you get to know them and know their parents,” Foy said. “It was great to see people show up. And those that couldn’t have sent wishes through Facebook. She’s been through a few thousand kids. And those kids have kids going here now. That’s the crazy part.”

It became one large extended family.

“Trips, camps, swimming, arts and crafts were always her specialty,” Baker said. “She was like an aunt to everyone. She was fantastic.”

Although Crossan-Sanicky is usually on top of every aspect at camp, she said the surprise was  executed perfectly by those involved. It included balloons, food and a cake.

“I’ve been crying all day,” she said, wiping away a stray tear. “They certainly pulled off the surprise. I truly am blessed.”