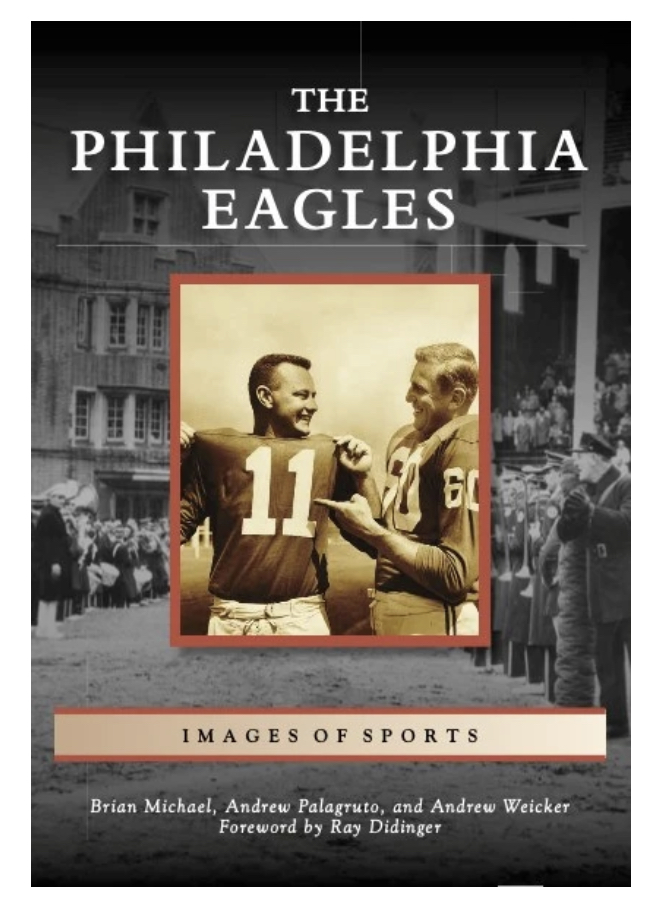 The Philadelphia Eagles have had a colorful past. And a trio of local writers are hoping you read all about it.

College professor Brian Michael encouraged a pair of his Holy Family University students, Andrew Palagruto and Andrew Weicker, to join him in a deep dive into the history of Philadelphia’s beloved professional football team. From the early days of the Frankford Yellow Jackets to the parade up Broad Street celebrating the Eagles’ Super Bowl victory, the new book chronicles nearly 100 years of football from a fan’s point of view. It’s called The Philadelphia Eagles Photo History Book and it is published by Arcadia Publishing. The book is due to hit book store shelves on Sept. 3.

“We try to be fan-focused because that’s what we are when it comes down to it,” said Michael, a native of the Torresdale section of the Northeast who now lives in the Bella Vista neighborhood of South Philly.

This is no ordinary fan’s description. The three men spent many long days contacting writers, photographers and historians in compiling their dedicated project, which includes football in the city prior to the Yellow Jackets, decades of Eagles games and an extensive collection of fan photos ranging from the 1920s to the Super Bowl victory.

“Our book is more personal,” said Palagruto, a Neumann-Goretti grad who lives near the stadium complex at 11th and Porter streets. “A lot of the images that we’ve seen in other books have been from big publications that put their stamp on it. A lot of ours have never been seen before. We had to go dig them up from somewhere. Not many books do as much digging as we did.”

The project began in December and came together rather quickly despite all the intense research and hurdles caused by the pandemic. The three remained close since their classes at Holy Family and strengthened their connection at Shibe Vintage Sports at 137 S. 13th St., which is owned by Michael. The two students spent time working at the store over the years and the idea to collaborate on a book appeared last year.

“(Michael) was our main sports teacher there for the better half of most of our classes,” said Weicker, a Father Judge grad who runs a fan website called Philadelphia Eagles Frenzy, which has 175,000 followers. “We developed a close relationship with each other. Then he approached us about doing this book and we’re both big Eagles fans so it was pretty obvious.”

Although maybe not completely obvious at first.

“I thought it was a joke,” Palagruto said with a laugh. “But once he started sending out the emails, I was like, OK, this is actually happening.”

Weicker had the same initial thought.

“It was a little scary, thinking about how much work would go into it,” Weicker said. “But once we started working on it, it actually seemed pretty smooth. COVID was definitely a factor with some of the speed bumps but I really enjoyed the process.”

They turned an idea into a finished product in about nine months. But they also took time to savor stories that were learned along the way. Weicker was fascinated with entries about Bucko Kilroy, a Port Richmond native and North Catholic High School graduate who played 13 seasons for the Yellow Jackets.

“It’s crazy to think about someone like that,” Weicker said. “He was an ordinary Philly guy and had a long NFL career and played for his favorite team.”

The group made good use of access to Temple University’s Archives, which included photos from the Philadelphia Bulletin. They contacted the Frankford Historical Society and solicited and sorted through hundreds of fan photos.

Then the historian aspect was conquered, by contacting Ray Didinger, who wrote the foreword to the book. Contacting former Eagles photographer Ed Mahan was also at the top of the list.

“Every game for the Eagles, he had photos.” Michael said of Mahan’s work. “It took a little while to track him down, but we did. He had a whole basement full of photos and was a great resource.”

Despite the hard work that went into creating the book, it’s a fun and easy read according to Michael.

“It’s a fun and accessible book,” Michael said. “You can just pick it up on any page and start reading it. It’s not too dense. It’s definitely something you can keep in the bathroom.”

The easiest place to find the book will be at Shibe Vintage Sports. It will also be available in local bookstores and online. The guys are in the process of booking live book launch events, which is all part of the fun experience of writing a first book.

“To me, it was pretty cool because my mom wrote history books,” Palagruto said. “She would always tell me stories and I’d see books with her name on it. So it will be cool for her to see a book with my name on it next to hers. It’s a completely different type of book but still a pretty cool concept.”