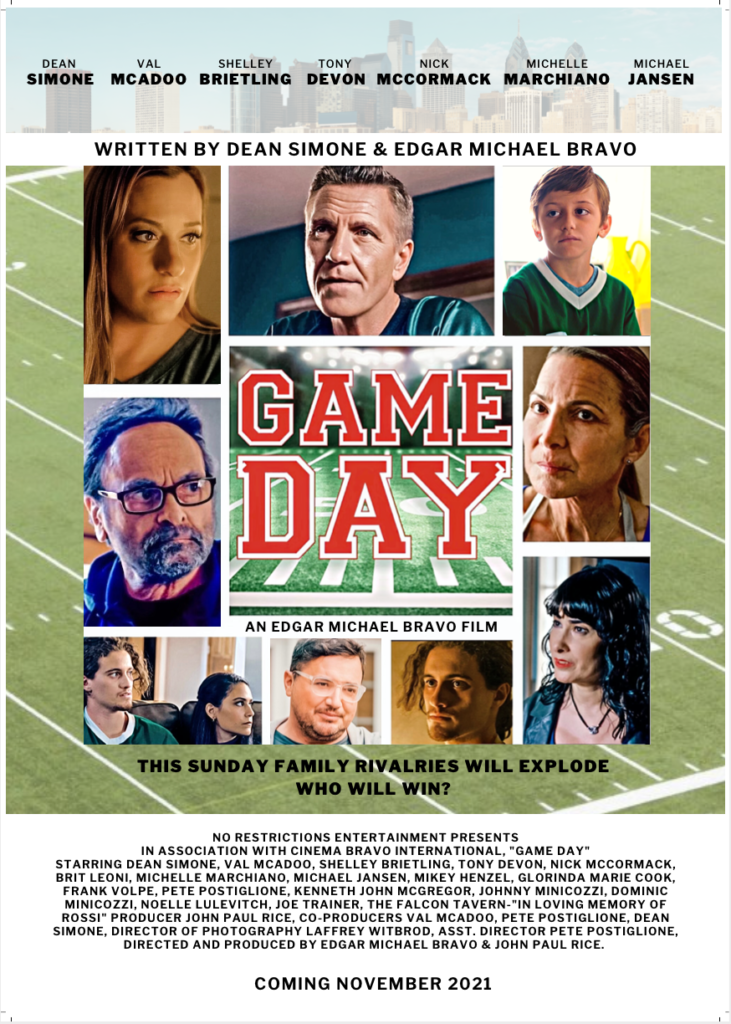 Familial relationships are the focal point of a new independently made film set in Philly that will premiere on Nov. 13 at the MJ Freed Theatre in Chester, PA.

The film, titled Game Day, focuses on the Fortes, an Italian-American family from Philly that gathers every Sunday to cheer on their favorite team, the Eagles. A tight-knit household, they have had to deal with their fair share of hardships. The matriarch, Theresa, is stricken with cancer and is apprehensive about undergoing chemotherapy. Theresa’s son, Zack, has gone through a messy split from the mother of his two sons, Marco and Vince, the former of which suffers from clinical depression. On top of that, Zack’s wife, Jamie, who helped raise Zack’s now-grown sons and their six-year-old son, Cash, faces her own struggles with Zack and the rest of his family.

As they all watch the Eagles take on the Dallas Cowboys, the family is forced to come to grips with the tensions and bitter realizations that arise over the course of the game.

“Everyone in this story is fighting for their lives and has something to win or lose,” said Edgar Bravo, the film’s director.

Co-written by actor, singer and Philly native Dean Simone, who also stars in the film as Zack, it is based in large part on Simone’s real-life family experiences growing up in the Philly area. He said he noticed how familial tensions would always come to a head on football Sundays, thanks to their naturally chaotic atmospheres.

“Being a Birds fan is not just being a part of some casual football enthusiast sub-base. It’s a damn culture,” Simone said in a press release. “On the way to the games or just watching them at home together, there were discussions about politics, family dynamics, philosophy, religion, food and more than anything else about the Eagles. How to fix them, fight for them and follow them like a true fan while bleeding Kelly Green all the way.”

A majority of those involved in the production, including Simone’s co-stars Michelle Marchiano, Val McAdoo, who also served as co-producer, Tony Devon, Shelley Brietling and co-producer Pete Postiglione, all hail from the Philly area. Though filming was originally supposed to take place in Atlanta, it eventually moved to their hometown thanks to McAdoo and Postiglione’s connection with the Swarthmore, PA-based Actor’s Co-Op, which helped the film crew scout filming locations and fill out the cast.

“We truly became a family during that time,” Marchiano said.

Marchiano said that the movie should resonate with not only those who call Philly home, but people who have had to deal with the issues the Forte family endures.

“Anyone that grew up with any kind of dysfunction in their households understands, especially when there’s a special event, how things can just blow up,” Marchiano said.

More information regarding tickets, which go for $20, as well as the film’s cast, production team, and sponsors can be found at GameDayTheMovie.com.