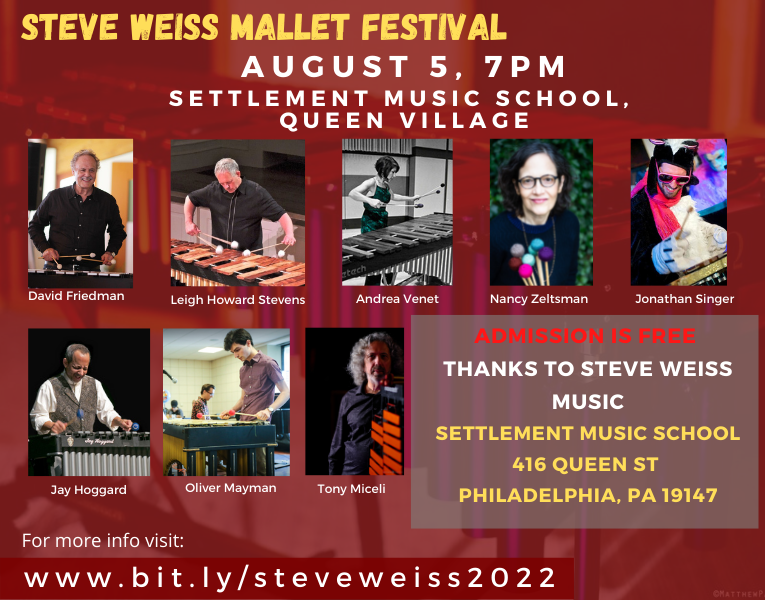 They bang the drum in memory of Steve Weiss.

In August, percussionists from around the world will gather in Philadelphia for a three-day festival and pay homage to Steve Weiss, who helped grow the local drumming community.

Weiss is remembered as the founder of the Willow Grove-based percussion retail business that bore his name. Weiss died in 2014 after a long courageous battle with prostate cancer.

The second annual Steve Weiss Mallet Festival will kick off with workshops beginning on Aug. 1, leading up to a free concert at the Settlement Music School at 416 Queen St. in South Philly on Aug. 5. It will include some of the top percussionists in the world performing on mallet instruments. Many were musicians who were helped by Weiss along the way.

The aim of the festival will be to shine a light on percussionists while keeping Weiss’ memory alive.

“The goal of the festival is to bring these instruments usually found in the back of the orchestra to the front of the stage, into the spotlight and performed on by the best players in the world,” said Tony Miceli, founder and curator of the festival.

Weiss started his business shortly after high school by renting out percussion instruments. He transitioned into a career as an authorized dealer of Ludwig/Musser and Slingerland/Deagan, which were known as two major manufacturers. He moved his growing business to Willow Grove in 1998, settling in a 13,500-square-foot store and an accompanying 22,000-square-foot warehouse that was added a few years later. After Weiss’ death, Dan Sullivan took over the business and kept Weiss’ name on the building.

Weiss was well known for helping spread the joy of percussion to student drummers everywhere. It’s one of the reasons one of the concerts in the festival will be aimed toward children.

“It is the goal of this festival to present these instruments to a Philadelphia audience that includes children,” Miceli said. “Owner Dan Sullivan insists that one concert be a children’s concert.”