Stevie Richards has been in his fair share of big matches. Richards, whose real name is Michael Manna, took part in the first Extreme Championship Wrestling match. A few years later, he was part of the South Philadelphia-based promotion’s first pay-per-view when he wrestled in the main event against the Sandman and Terry Funk. Richards is no stranger to big matches, and many of them have taken place a few miles south of the Port Richmond house he grew up in.

On Saturday night, at the 2300 Arena, 2300 S. Swanson St., better known as the former ECW Arena, Richards will have his next big match when he main events Wildkat Sports’ debut in Philadelphia. He’ll defend the promotion’s heavyweight championship against Wildkat owner Luke Hawx.

“I think this is the best match we could have because we have such a history with each other,” Richards, who became friends with the wrestler known as the “Southern Stomper” when they wrestled in Extreme Rising, a now-defunct Philadelphia promotion, said. “I called him out because I think we can have a good match because we have formed a friendship.

“I called him out because he was known as the guy who would always tell it like it is. I think he is (soft) now and I wanted to wrestle him.”

Richards might question Hawx’ ability in the ring these days, but he has the utmost respect for him as a wrestling promoter.

“Luke runs wrestling like a business, a lot of guys don’t do that, but he does because he wants the wrestlers to be successful and he wants the fans to have a good time and come back,” Richards said. “He can be your best friend, but if you’re not in good shape, if you get fat or you can’t wrestle, you’ll be his friend but you won’t be on his show. He wants to put on a good product.”

The Frankford High School graduate has enjoyed quite a career.

He got his start in ECW, but then he went on to enjoy success in World Championship Wrestling, and then wrestled for World Wrestling Entertainment, where he spent more than 10 years in various roles. Following his WWE run, he went to Total Nonstop Action before returning to independent promotions.

While he had stints in some of the biggest wrestling promotions in the world, he might be at his best now thanks to his workout regimen.

“I start every day with a workout,” Richards, 45, said. “I usually wake up early, between 3 and 4:30 a.m. It gets me in a great emotional, physical and psychological state. I’m passionate about it and I’m always changing it to make it work better.”

Richards is so passionate about his workouts that he offers them online. For $5, customers get access to online workouts and a calendar to track their progress.

The workout junkie has made himself better in the ring. He may have been a star in the 1990s and 2000s, but Richards feels he’s at his peak today. Richards makes appearances for Ring of Honor, a wrestling promotion known for having great wrestling. And on Saturday, prior to the Wildkat card, Richards will host a seminar for wrestlers trying to learn their craft.

“I think people listen to me for two reasons,” Richards said. “I’ve had a lot of help, learning psychology. I’ve learned from guys like Raven, I learned while I was in the (Blue World Order, a parody of the successful New World Order) and I learned a lot from Paul Heyman in ECW. And the other big thing is I’m very safe. When I’m in the ring, I take care of the other guy. That’s the biggest thing you have to do in wrestling.”

Richards also has other big things he is taking care of.

He recently got his real estate license in Atlanta, and is getting started on his new career. And when he isn’t working or work- ing out, he’s hanging with his two best friends, Mia and Odin — his cats.

Mia was thought to have FIV, but was recently tested and no longer has the disease. Odin suffered a horrible injury to his eye, which he lost. But he still has his loving spirit.

“Anyone who follows me knows I love cats,” Richards, who also works with Show Your Soft Side, an anti-animal abuse campaign pitting athletes with pets, said. “When I’m wrestling, I’ll FaceTime with them. They come into the gym and when they’re there, it sometimes alters the workout.”

Luckily, the cats have cooper- ated and Richards is more than ready to wrestle back in his hometown.

During a recent interview in New Orleans while he was calling out the challenger, Richards referred to Philadelphia as the greatest city in the world.

But just because the conquer- ing hero is returning, Richards isn’t looking at this as a happy homecoming. He’s looking at it like it’s a big match for a big promotion.

“Luke is bringing Wildkat to Philadelphia because the city loves wrestling,” Richards said. “I think people are really going to like it. This main event has a lot of history, but there are a lot of great wrestlers. This is a big show for all of us.” 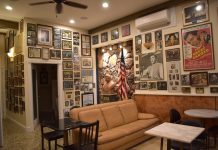