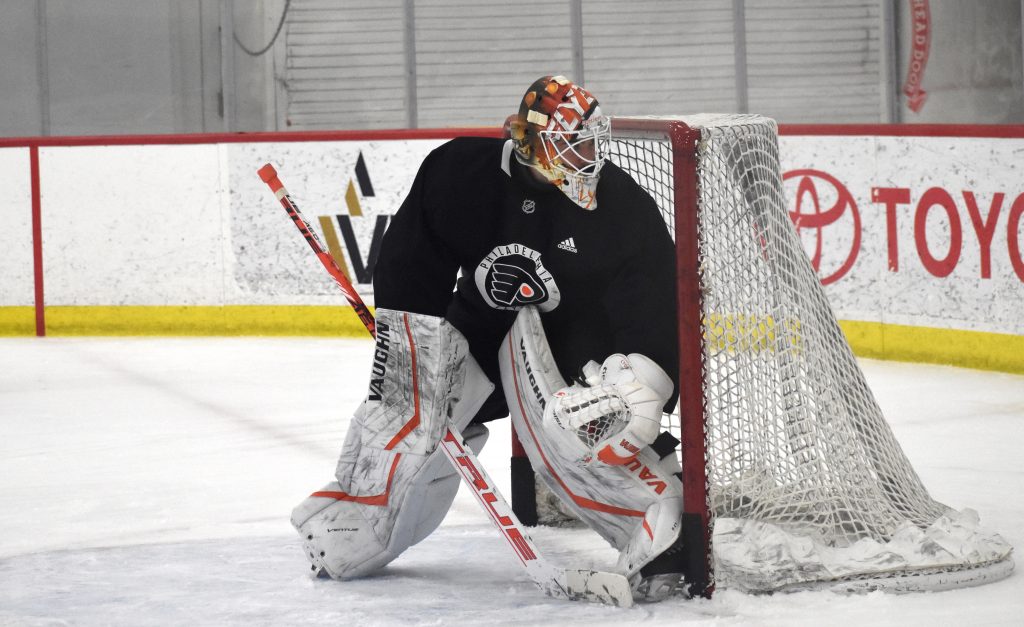 Alex Lyon is a guy who likes a steady routine.

But it’s something he has basically no control over during his time as the Flyers’ third goalie. Rolling with the punches is something Lyon is getting more comfortable with, while waiting for the next call.

“I’m the kind of guy that likes going home every day and I like eating the same thing and going to sleep at the same time,” Lyon said. “I’m very regimented in that way. But it’s also been a great learning lesson for me to deal with uncertainty. It’s helped me mature a lot and grow as a person. It sucks, but it’s also part of the gig.”

When opportunity knocks, the routines are out the window and Lyon is ready to pounce. Carter Hart’s injury a few weeks back opened the door for Lyon to join the Flyers in a backup role to Brian Elliott. But with that, Lyon goes from starting two or three games a week with the Lehigh Valley Phantoms, to a spot start here and there with the big club, as well as sometimes sharing a net at practice, making it tough to get into a rhythm.

Lyon’s first appearance this season was a 4-1 letdown loss to the Montreal Canadiens on Jan. 16, which was the second half of a back-to-back, a night after the Flyers took down the defending champion St. Louis Blues.

He had to wait 16 days until his next chance (although he did squeeze in two starts with the Phantoms during the NHL All-Star break), and Lyon made the most of it, earning a 6-3 victory over the high-powered Colorado Avalanche on Saturday.

“Just to contribute feels really, really good,” Lyon said. “It’s what any hockey player wants to do is to contribute to the success of the team. At the same time, I’m over it and gotta move on and try to bring the same work ethic on a daily basis.”

Lyon made 28 saves that game and held one of the best lines in hockey in check by allowing just one goal to Mikko Rantanen while keeping Nathan MacKinnon and Gabriel Landeskog off the board. It was, once again, the second half of a back-to-back and Lyon stood tall.

“When I needed Alex to come in against Colorado, he was a difference maker,” Flyers coach Alain Vigneault said. “A big part of any team’s success is goaltending. We’re getting solid goaltending.”

That includes Elliott, who is 13-5-4 this season with a .903 save percentage and is fresh off a shutout over the Detroit Red Wings on Monday. When Lyon was asked about studying under Elliott, his face lit up.

“Having a great deal of respect for (Elliott) would be an understatement,” Lyon said. “I think he’s a true professional and works his (butt) off. I’ve learned so much from him in the time I’ve been here. He brings the same exact product to the rink every single day, which is something I aspire to have. His longevity is proof that it works. Everybody wants him on their team. I strive to be like Brian Elliott.”

Having played 153 professional games, including 138 in the AHL with the Phantoms (71-52-12-6 record, .914 career save percentage), Lyon could offer a bit of advice himself. But when he looks at 21-year-old Hart, he’d rather be the student than the teacher.

“I try to be sponge around him but I would never tell him that,” Lyon said with a laugh. “But on the ice, watching the things he does, he’s so instinctual. He’s got such a good goaltending base and foundation. I try to watch and learn as much as I can from both of those guys.”

Lyon isn’t sure if he’ll get another start this season as Hart gets closer to a return. It could depend on if Hart is ready next week when the Flyers host the Panthers on Monday and travel to the Islanders on Tuesday.

When the time comes, Lyon accepts the fact that he’ll be returned to Lehigh Valley. His return will be bittersweet.

“Obviously, the NHL is the No. 1 goal,” Lyon said. “But I’m also aware of the reality. But yeah, I miss those guys. It’s been my home for four years and I miss being at the PPL Center every day. I wouldn’t trade (playing in the NHL), but it’s a pretty great second option.”