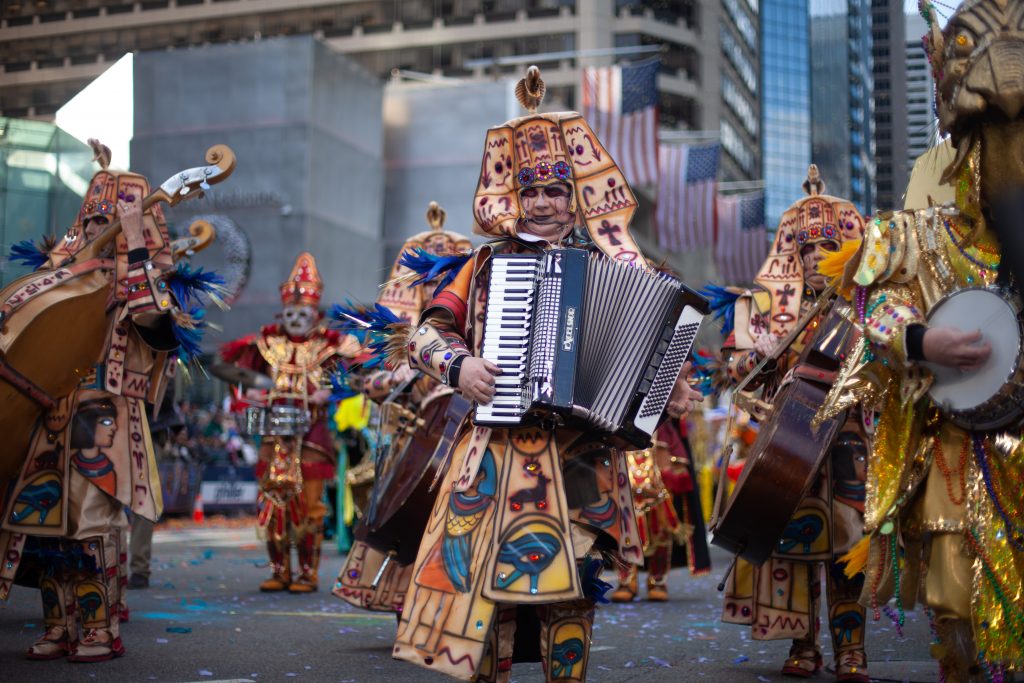 EDITORS NOTE: Mummers Mardi Gras officials are now combining the two, previously scheduled morning and late afternoon sessions into one, day-long celebration and keeping the ticket price at just $20 so fans of Mummery can see all of their favorite bands throughout the day.

All 16 string bands will perform from 11 a.m. to 8 p.m., and there will be activities for people of all ages. Parking is free.

Miss out on the Mummers this year?

You can still get your string band fix, as the Mummers 7th Annual Mardi Gras returns to South Philadelphia at Xfinity Live! on Sunday, Feb. 23.

The popular entertainment venue in the South Philadelphia Sports Complex will host all 16 string bands across two sessions for a full day of Mummery in February. It promises to be one of the biggest fundraisers for the Mummers, who have traditionally entertained residents with their New Year’s Day Parade since 1901.

The Mummers Mardi Gras was created and organized by ADVENT Consulting, which continues to dedicate a large effort to the fundraising cause.

“The Mummers need a lot of support,” ADVENT President Joe DeCandido said. “It’s a lifelong tradition for many people and many families and generations. I’ve had guys tell me their father or grandfather was a Mummer, and others say their kid is a Mummer and they’re excited when their kid picks up an instrument because it’s one step closer to being a member of their string band.”

The event originated six years ago as a small, 1,200-person ticketed event at the Piazza in Northern Liberties, and included just four of the string bands. It evolved into a parade in Manayunk for the next four years before returning to South Philadelphia last year at the 2300 Arena on Swanson Street.

This year, in moving to Xfinity Live!, more tickets will be available and more space will be utilized for a bundle of activities. And it’s all indoors.

“We wanted a larger venue where we could sell more tickets and raise more money for the Mummers string bands,” DeCandido said. “And that’s how we landed on Xfinity Live! They’ve been an incredible partner.  It’s a venue set up for entertainment events and it seemed like the perfect fit.”

The event will be broken up into two separate ticketed sessions.

The second session, which runs from 4-8 p.m., will include South Philadelphia, Fralinger, Avalon, Uptown, Ferko, Hegeman, Durning and Pennsport.

Tickets are $13.91 for each session. Parking is free, and food and drinks will be for sale. Tickets can be purchased at www.mummersmardigras.com.

There will be plenty to do away from the music, too. The Mummers string band captains will take part in a mechanical bull riding contest in the PBR Bar. For a small donation, fans will also have the opportunity to build their own Mummers umbrella with sequins and feathers. A photo booth with Mummers props and face painting help create a family atmosphere at the event. Children under 3 are admitted free.

A large portion of the money raised will benefit the Mummers String Band Association.

In recent years, after cuts in the city’s budget, the Mummers Association has suffered economically, causing a reduction in the ranks of Mummers and their performance clubs.

Mummers Mardi Gras has raised more than $130,000 for the string bands over the years and has provided an opportunity for the Mummers to strut with fans of all ages in the place where the tradition originated.

“Any way to help these people who invest so much time and energy,” DeCandido said. “These bands have to raise about $100,000 a year just to get their costumes and keep up with their instruments. They’re gigging all year long. We created Mummers Mardi Gras less than two months after New Year’s Day. We just want to start their year off with some good exposure and help them raise some money early on.”