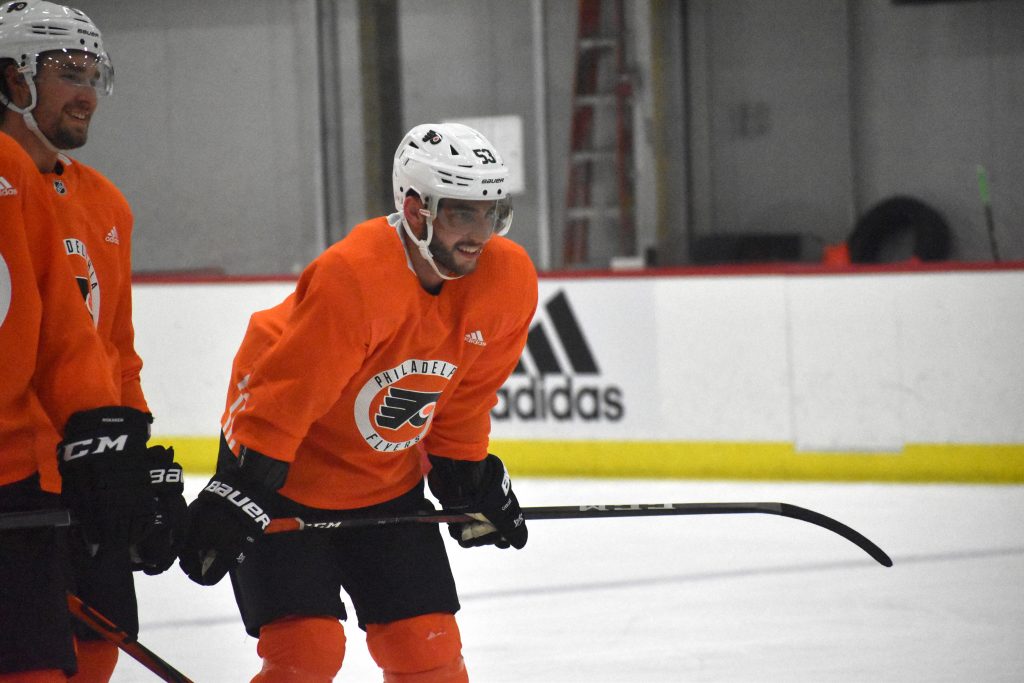 Shayne Gostisbehere is ready when No. 53 gets called.

If the Flyers continue to trend upward and into the playoffs, it’s very likely his services will be needed at some point, as very few teams make long playoff runs without escaping injury.

Gostisbehere certainly isn’t hoping an injury occurs, but it might be the only way he creeps back into the lineup in the near future, as the Flyers don’t seem willing to tweak things much while the team is running hot and playing important divisional games.
Gostisbehere continues to practice – and wait.

“The team’s winning, we’re rolling,” Gostisbehere said after practice on Saturday. “We’re in a playoff spot, and I think we can even get some home ice, so I think for us right now is to keep it rolling. My number will be called sometime, and I’ll be ready.”

Gostisbehere’s current rank in the Flyers defensive hierarchy shows exactly how fast things
move in the current NHL. Just two seasons ago, Gostisbehere compiled a 65-point season, quarterbacking the Flyers’ first power-play unit, and was a fan favorite at the Wells Fargo Center.

Last season was underwhelming by comparison, as Gostisbehere accounted for just 37 points while playing the same number of games (78).

This season has also been a struggle, as he’s posted just five goals and seven assists through 41 games. He was replaced on the top power play unit early in the season and has spent some time in the press box as a healthy scratch.

To his credit, Gostisbehere worked back into the lineup and was playing well, despite not
producing the offensive numbers fans had grown accustomed to. He was a plus-3 in a 5-4 loss to Carolina on Jan. 7 but suffered a knee injury late in the game and was forced to miss a month of action. He returned for one game before tweaking it again on Feb. 6 and hasn’t played, aside from a quick two-game rehab assignment in the AHL.

Gostisbehere has missed 21 NHL games since Carolina, and the Flyers are 16-4-1 in those games. You can connect the dots. But Gostisbehere says he’ll be ready to step in when needed.

“Right now, I feel like I’m 100 percent for the last week or so,” he said. “I think going down (to the AHL) for conditioning really opened my eyes to how good I could feel. It was a good test of a back-to-back and on the road and I felt pretty good down there.”

If the ups and downs weren’t enough, Gostisbehere also had to deal with hearing his name
thrown around in trade rumors, though Flyers general manager Chuck Fletcher said he didn’t attempt to move the 26-year-old defenseman.

“That’s been the interesting one,” Fletcher said at the conclusion of the trade deadline. “I’ve been here a year and I can’t say I’m always on social media, but I’m amazed at how often I’m trading him. I like Shayne. He’s gone through a few weeks, probably over a month now with some knee issues and he’s cleaned it up. He skated really well this weekend. I mean, right now we’re carrying seven D. He’s one of them. He’s a guy I think can still contribute. He can play on the power play. We were certainly not looking to move him.”

That doesn’t mean there wasn’t interest from other teams. Fletcher said he did receive calls but balked at trading Gostisbehere and his very fair $4.5 million cap hit, which runs through the 2022-23 season.

Gostisbehere would prefer to stay. He was an original Flyers draft pick and is embedded in the community through his great work with the Pennsylvania SPCA and cares for three dogs at home.

“It’s awesome,” he said. “My girlfriend and I go to the shelter randomly sometimes just to hang out and just see the facility and donate some dog food or do anything we can to help out. It’s pretty fun.”

“You have these abilities who make you the player that you are, and it’s really tough to go out there and try to do things when you know you’re going to feel some pain,” Gostisbehere said.

“Just to be out there now and do things freely and not feel anything and think about the game is very nice. It’s just nice to be healthy.”