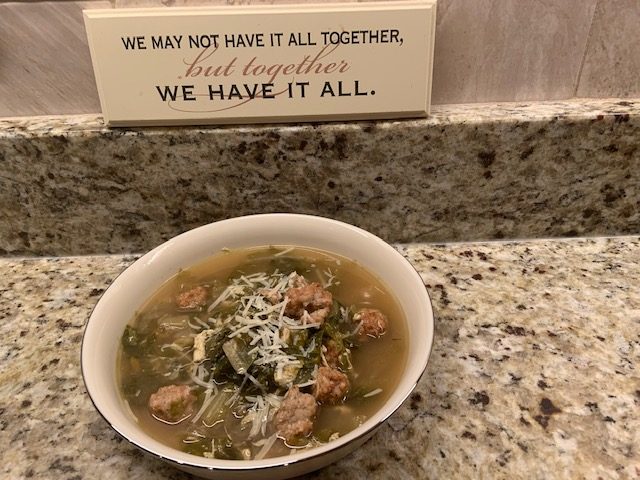 By Tony Leodora
FOR THE REVIEW

This is the story of a soup that has become very popular in recent years … in restaurants, supermarkets, even convenience stores. They call it wedding soup. It is the trendy soup of the last 20 years, or so.

It’s too bad that most people don’t know the real version of it. I have been enjoying it, in a much purer form, all of my life … and never, once, had it at a wedding. In our family, it was called what it really is – escarole soup. Or, more commonly pronounced Shca-rrole soup … in the South Philadelphia vernacular that I heard as a kid during visits with relatives.

My two grandparents lived around the corner from each other. Visits were always joyful, noisy gatherings – with one common denominator … amazing food. My father’s side of the family – Leodora — came from Abruzzo, about halfway up the Boot of Italy on the Adriatic Sea. That region of Italy is known for its fresh, natural cuisine. Escarole soup was part of every holiday dinner. Their version featured tiny, homemade, fried croutons that floated delicately in the soup. No meatballs. No pasta. Stealing a few croutons before they went into the soup was well-worth the threat of getting hit with the wooden spoon.

My mother’s side of the family came from the tiny town of Atripalda in the Province of Avellino, east of Naples. My grandmother, Josephine D’Orsi, took the holiday tradition of making escarole soup and raised it to a new level. Not only did she make it for Christmas, Easter and Thanksgiving but she added New Year’s, St. Joseph’s Feast Day, St. Anthony’s Feast Day, every birthday … and whenever visitors came for dinner, which was often. People loved her cooking. I would put her rustic culinary magic up against any of the celebrated chefs. Her eggplant parmigiana was renowned among family and friends. As was her homemade cavatelli and braciole. Fights occurred over leftovers … if there were any.
But her escarole soup became her trademark. And it was passed down to my mother, Lena Leodora, who made it … almost as regularly. And she made it despite the fact that, in its traditional form, it was a very labor-intensive process. 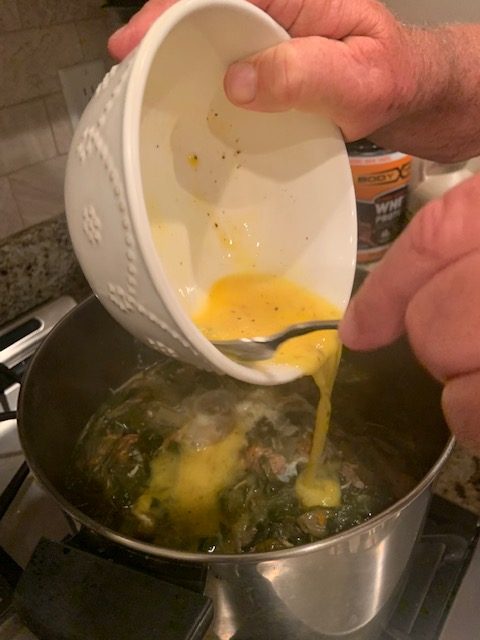 So, in a year when family and friends are locked away behind the pandemic
curtain, I decided to bring the memories of family into our house … even if holiday dinners are simply a dinner for two. Suddenly, we were no longer alone. It started with making the chicken broth from scratch. The remains of a rotisserie chicken were used, carefully trimmed of all skin and fat. Then, finely chopped garlic, onions and carrots were sautéed in olive oil. The chicken carcass was then placed in the pot and covered with water. Seasonings were added and it was brought to a boil. The heat was lowered to simmer and a lid was placed on the pot. Two large heads of escarole were prepared. The bottoms were cut off and it was chopped into small, bite-size leafs. They were then placed in a sink filled with water and swished briskly to remove any grit. A larger pot was put on the stove. Garlic was browned in a small bit of olive oil. The chopped, water-logged escarole was then placed in the pot and the lid was closed. Turning the escarole every few minutes was part of the process of cooking it down – part-sautéed and part-steamed.

While this was taking place, the chicken bones were removed from the broth and all of the little pieces of chicken were picked from the bones and returned to the broth. In this Depression-based recipe, nothing is wasted. The broth, with tiny chicken pieces, then was poured over the escarole and the lid was put back on the pot, to simmer slowly.
The final painstaking step – making the little meatballs that float in the escarole soup. Instead of the fried homemade croutons used by the Abbruzzese side of my family, the Neapolitan side used tiny meatballs. This is where a bit of heresy enters the story. Unlike the original recipe, I use ground turkey to make my meatballs. Aside from being a bit healthier, the taste seems to blend better with the chicken-based soup. Also, a concession to modern technology, I cook the meatballs in an air fryer. It only takes 10 minutes. There is no mess from splattering oil in a frying pan. Again, the end result is healthier. And the tiny meatballs come out perfectly … as attested by a threat-free tasting before they entered the soup. 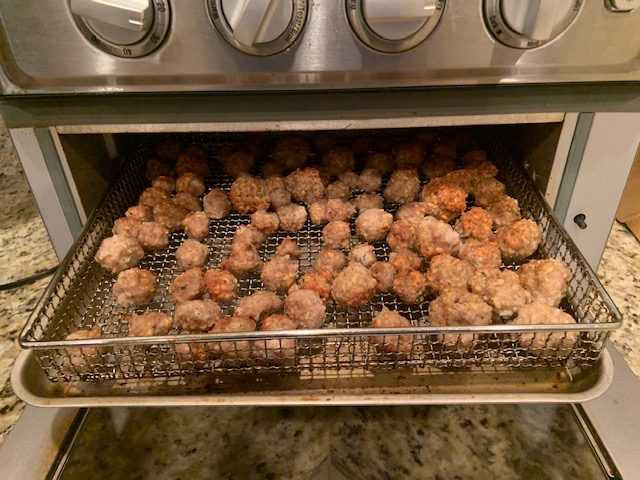 The meatballs are placed in the large pot with the escarole and chicken broth. The soup is brought to a slow boil. Then comes the finishing touch. Stracciatella. The literal meaning of the Italian word is “rags” or “little shreds”. Eggs are whisked in a bowl and held over the boiling soup. Still whisking, a thin ribbon of egg is dropped into the soup. As the egg ribbons quickly harden to a decorative white foam, the soup is stirred to disperse the egg pieces throughout the soup. A final taste to make sure the spices are balanced evenly, then the soup is ladled into a bowl. The crowning glory comes from a dusting of grated locatelli cheese. Hint – never add the cheese while cooking the soup because it will harden and burn.

All of these tips were passed down from the original Nana … to my Mom, who became Nana and eventually to my sister, who became Nana last year. Generations change … but the soup never does. No pasta. No wedding. Just the best soup my grandmother ever made. And my mother ever made. And now it is the traditional start to our Christmas Dinner for two. But the warmth of this escarole soup will make our house seem as if it is crowded with smiling, happy faces.