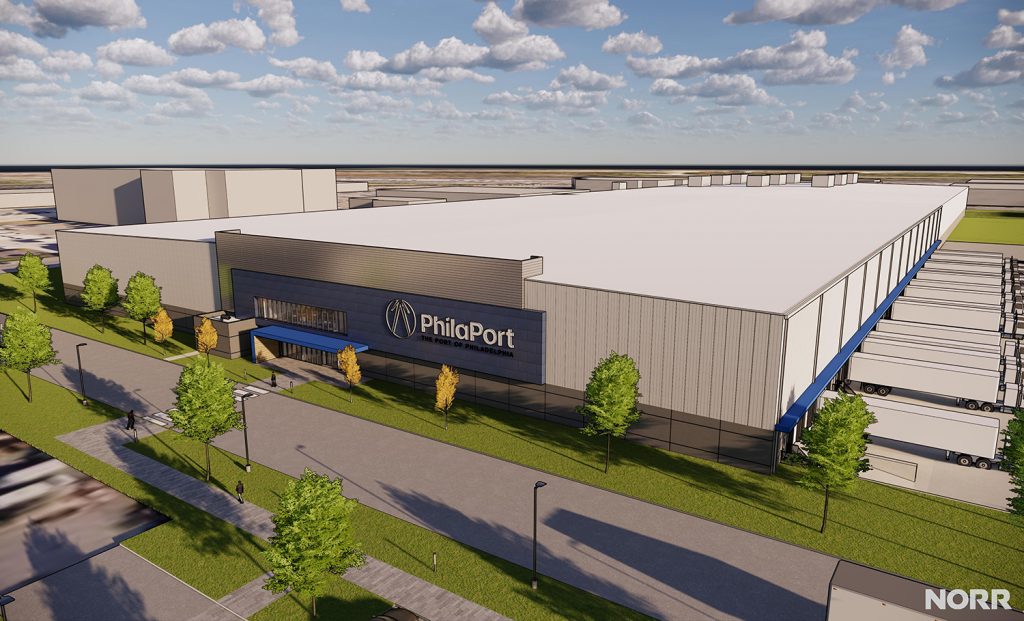 Work has officially begun on a new $42 million distribution center within a mile of the Packer Avenue Marine Terminal.

PhilaPort officially broke ground on the 201,621-square-foot warehouse on March 4 near 3rd Street and Pattison Avenue, and the new facility is expected to create more than 200 jobs for the local economy.

“The commonwealth’s $300 million investment in the port has given PhilaPort the tools it needs to improve its competitive position and create more family-sustaining middle-class jobs that are needed now more than ever,” Mayor Jim Kenney said at the windy groundbreaking ceremony.

PhilaPort is the fastest-growing container port in the country after growing 7 percent in 2020. Its compound annual growth over the last 10 years has been 10 percent.

The 40-foot-high building will include 32 loading docks on 28.57 acres of land. It will provide storage for cargoes arriving at PhilaPort’s nearby Packer Avenue Marine Terminal.

“It is an essential part of the district,” said state Sen. Nikil Saval, whose district includes the area of construction within South Philadelphia. “And it is essential work that is done here by essential workers. The port keeps people fed, housed and clothed, especially in the midst of this devastating pandemic. It connects Philadelphia to the world and brings them here to Philadelphia.”

According to officials, the facility will be used to attract new international cargoes and ocean lines to the port. It will be leased to Holt Logistics Corp., as part of the Packer Avenue Marine Terminal lease. The new warehouse will allow Holt to remove containers from the terminal and rapidly unload them into a state-of-the-art facility. Containers can then be returned directly to the marine terminal or moved to a Pennsylvania factory to be loaded with exports, further expanding opportunities for local and regional commerce.

“We often use the phrase, ‘A rising tide lifts all boats,’ but in this case our rising land-based infrastructure will lift the entire Philadelphia region to new heights,” said Leo Holt, president of Holt Logistics Corp. “As a marine terminal operator, one of the main pillars of our service profile is velocity. Today’s shippers demand it. It is essential to our aspirations to grow the Port of Philadelphia’s throughput by 100 percent.”

Cargoes are expected to be non-refrigerated containers but a planned second phase is expected to include 217,000 additional feet of refrigerated warehousing at the same site.

“To help the Port of Philadelphia continue to compete in a developing system of global trade and attract new shippers, my administration has invested $300 million to the port,” said Gov. Tom Wolf in a pre-recorded video. “Today, the Port of Philadelphia is the fastest-growing container port on the U.S. East Coast and this new distribution center is an important step to improve port facilities and bring more traffic to the port.”

Kenney stressed the importance of bringing more jobs to the area during a tough financial year due to the pandemic.

“Some of the stuff we are struggling with during the pandemic are things like violence and shootings and young people going adrift,” Kenney said. “These are the kind of jobs that can get families back together and can reduce crime and reduce violence because you’re making those good wages backed by unions and have good benefits, a pension and something to look forward to in life and get these kids off the corner and into the warehouse.”