Kevin Opanel has come a long way to help the Neumann-Goretti High School baseball team’s quest for a championship.

In fact, he even crossed the border.

The Saints’ senior arrived in South Philly two years ago after spending the previous seven in Toronto, Canada. Opanel’s strong right pitching arm and his laid-back personality have been a welcomed addition to the Saints’ powerful roster.

“It was kind of a blessing in disguise for us,” Neumann-Goretti coach Mike Zolk said. “We got a call from school and they said, ‘Hey, we got a baseball player that just moved here from Canada.’ He was interested in playing for us and he came out as a sophomore and he was awesome.”

Opanel has ascended to the Saints’ ace, getting all the big assignments on the hill, going 6-0 on the season. On Saturday, he struck out eight in six and a third innings to help Neumann-Goretti knock off Monsignor Bonner-Archbishop Prendergast, 4-3, in the quarterfinal round of the Philadelphia Catholic League playoffs. Last week, he was named first-team All-Catholic, along with teammate and first baseman A.J. McGettigan.

“I was working all year for that,” said Opanel, who also plays third base when he’s not pitching. “I just wanted to be noticed.”

He certainly has been, and deservedly so. Opanel has always focused on baseball, aside from playing a little bit of ice hockey while in Canada, which is, of course, a rite of passage up North. Opanel’s mother is Canadian but Kevin was born in New Jersey and caught the baseball bug from his dad, who grew up in Olney.

“I started playing baseball when I was in diapers,” Opanel said with a laugh. “My dad (Glen Opanel) started me. He was a first baseman at Temple (University). Every day we’d be working on something.”

And he continues to do so. Opanel is humble in his craft despite owning an arm that can make opposing batters swing aimlessly on most occasions.

“I love how every day you can get better,” Opanel said. “It’s one of the hardest games in the world. You can never master anything. You just try to always get better.”

And the Saints have gotten better with Opanel on the bump over time.

“He had a bit of a bumpy road to start his career,” Zolk said. “But at this point we are seeing him do some stuff that seniors do. Just towards the last couple months of his high school career, he’s really stepped up and taken pride in what we do here and taken pride in what we represent. He plays the game a lot harder and smarter and more disciplined and it’s shown in his performance.”

“We have a team that’s filled with character,” said Zolk, who is a 2011 Neumann-Goretti grad and a former Catholic League MVP. “Some of these guys were friends’ little brothers of guys that were on my team or little neighborhood kids that have been around the program forever. Some have been around this program for 10 years and it really means something to them.” 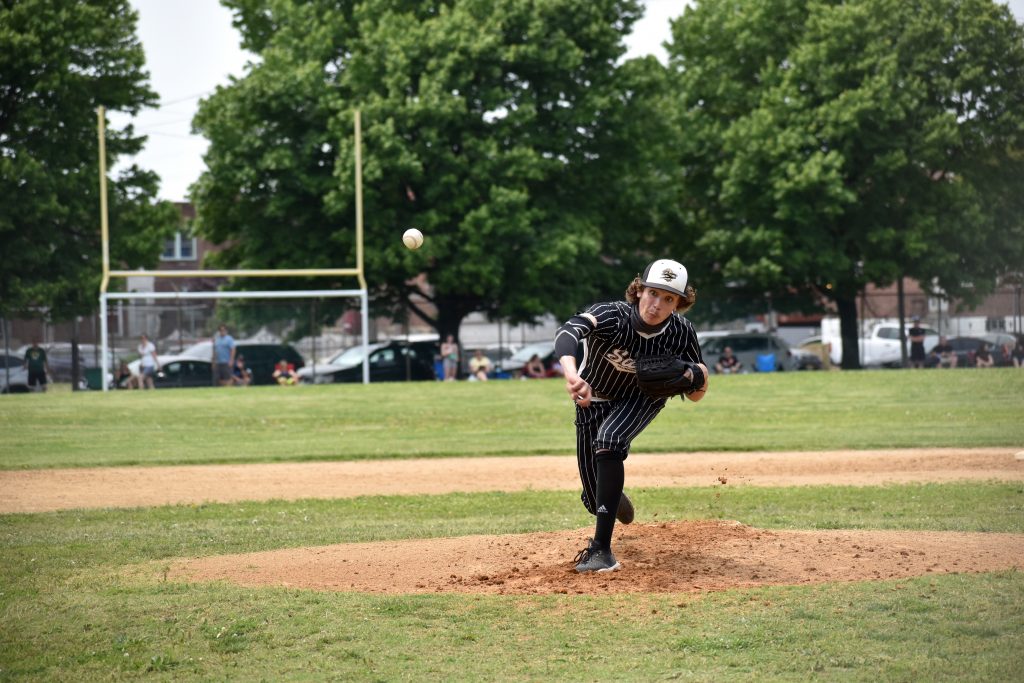 And it means a lot to have Opanel throwing smoke. The team is a more confident bunch when their ace gets handed the ball.

Opanel plans to attend Rowan College of South Jersey for the next two years while he figures out his next step and his career path. Right now, he’s focused on the rest of his high school career, which continues as third seed Neumann-Goretti will travel to No. 2 seed Archbishop Wood on May 26 for a semifinal matchup. If Opanel is rested and available, you can bet he’d love to be back on the hill. His teammates and coaches would love to see it, too.

“It’s almost a win every time,” Zolk said. “The one thing he does best is he fills up the strike zone. If he’s throwing strikes and we’re playing defense, we’re going to give ourselves a chance.”