In a battle of South Philly public schools, the Academy at Palumbo high school football team blanked Southern 12-0, to capture its first win of the season. The Griffins (1-1) had their season delayed, but finally opened play two weeks ago in a tight 8-6 loss to Belmont Charter, but rebounded with a staunch defensive effort to claim a victory over the Rams. Palumbo will look to make it two in a row when it visits Murrell Dobbins (0-3), which has been outscored 82-14 this season.

in back-to-back contests. The Rams will visit red-hot Kensington (4-1), which has won three straight, on Friday night.

The Academy at Palumbo turned its season around by winning all three of its games last week and outscored its opponents by a 19-2 margin. The Griffins (4-4) blanked William Bodine, before following up with 8-1 wins over Frankford and Kensington.

Horace Furness snapped a four-game losing streak with a 6-0 victory over Thomas Mastery Charter to win its third game of the year.

Southern raised its record to 5-0 following back-to-back shutouts over Science Leadership Academy (3-0) and String Theory (1-0) last week. The Rams are 5-0 through the weekend and have not allowed a goal yet on the season.

Furness stands at 1-4-1 as the Falcons earned a 1-1 tie against Preparatory Charter before suffering a 2-0 setback to String Theory. Prep Charter is now 0-2-1 following a 2-0 loss to Freire Charter.

Academy at Palumbo completed a busy week with a pair of wins and a non-league loss. The Griffins (7-2 overall, 7-0 in the Public League) swept William Bodine and Science Leadership Academy in straight sets. The victories sandwiched a 3-0 loss to Archbishop Ryan.

Creative and Performing Arts managed a split in its two games last week, beating Franklin Towne Charter, 3-1 before dropping a 3-1 matchup with Central. The Pegasus are 5-3 on the year.

Audenried lost 3-0 to Thomas Mastery Charter and now stands at 2-4 on the season.

Furness dropped a 3-1 match to Thomas Edison and a 3-0 match to Parkway Center City Middle College and now stands at 1-8 on the year.

Neumann-Goretti had a tough week with straight-set losses to St. Hubert and Archbishop Wood. The Saints are 1-6 in the Philadelphia Catholic League. 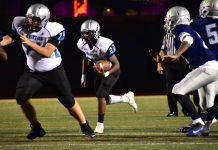 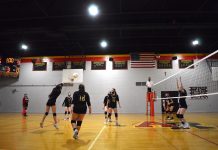