Some years ago, I was working as a sports-talk host when the program director called me in. “I thought you said you’re from South Philly,” he said. “I am,” I replied. “Well, you don’t sound like it.”

That moment still bothers me all these years later. The program director wasn’t complimenting me. He obviously believed that all South Philadelphians talk a certain way. A decent part of the audience the station was trying to attract were sports-loving males from South Philly. The program director was annoyed that here I was a South Philly guy and I wasn’t playing to that segment of the audience. The point was that I had spent four years at Temple University in the communications curriculum. The announcing classes helped me rid myself of any regional accents. Never mind I was from South Philly. This buffoon expected a “youse” out of me every now and then. Assumptions about our speech are the least of the stereotyping.

All of us from down here are assumed to be connected to the Mob. Suburbanites visit you and want to know if there were any mob hits in your neighborhood. Especially if your name ends with a vowel. The stereotyping is often unintentional. Our best friends are often the most guilty of these remarks. It’s all done in “jest.” Most of us shrug off the comments. We’ve learned to grow thick skin. The complete stereotype includes the automatic assumptions about your politics and the way you dress.

Sometimes we even play to the stereotype.

We figure we might as well get some advantage out of being stereotyped. We hint that we know “certain people.” A little menace goes a long way. Let them fear us if that’s what they want to believe. Helps in a tough negotiation. If you don’t agree with us, we know a guy who can change your mind. Playing to type sometimes makes us more interesting than we ordinarily would be. It protects us from hurt feelings. But it comes at a price. We feed the stereotype.

The stereotype has done damage to political careers of Italian-Americans. Rumor has it that former New York Gov. Mario Cuomo didn’t run for president because he didn’t want unfounded reports of mob ties to hurt his family. When Geraldine Ferraro ran for vice president, unsavory rumors attached themselves to her husband and she unfairly became a drag on the national ticket.

Some years ago when I worked at the Defense Personnel Support Center (also known as “the Quartermaster”) at 20th and Oregon, we ran into the same kind of stereotyping. And I believe it’s what led to the South Philly center closing, replaced by one in the Northeast. At the time, the highest-ranking civilian, an Italian-American, was convicted of taking millions of dollars in bribes.

There had been a few other, less-serious but similar, crimes during that period. Rumor has it — and I believe it — that headquarters in the D.C. area took a dim view of the unrelated events. And the onus was placed on South Philly.

A recent New York Times article discussed how mob movies deepened the part of the stereotype that attaches to Italians everywhere. The writer — also of Italian descent — bemoaned the fact that the better the film, the more it deepens the stereotype. THE GODFATHER films and THE SOPRANOS TV series – -for all of their unquestioned brilliance — also helped make the stereotype of Italians as mobsters almost acceptable. The Italian-American community became split over whether to rejoice over these much-celebrated films or turn their back on them. And, according to the NYT reporter, just as the influence of these films was fading, along comes the prequel to THE SOPRANOS, THE MANY SAINTS OF NEWARK.

David Chase, the genius behind THE SOPRANOS, is Italian-American (the family name was shortened from DeCesare). When asked about whether he’s bothered about the possible negative stereotyping of Italians attached to his productions, Chase says his only consideration is making good pictures. Ironically or perhaps not, Italian-American filmmakers are the ones responsible for the best of these movies. Francis Ford Coppola is responsible for THE GODFATHER films. Martin Scorcese (GOODFELLAS, CASINO, etc.) is another example.

It seems unnecessary to have to point out that most of us are hardworking and law-abiding. It comes across as whiny and defensive. Some like the NYT reporter wish Hollywood would make some films about the richness of our culture, apart from mob movies. But we also acknowledge the reality that exists behind THE GODFATHER and THE SOPRANOS. We enjoy them in the context that they tell an entertaining story.

Just not the entire story.

Cardella: Halloween: Will It Ever End 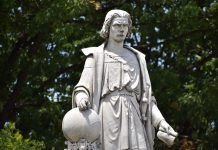