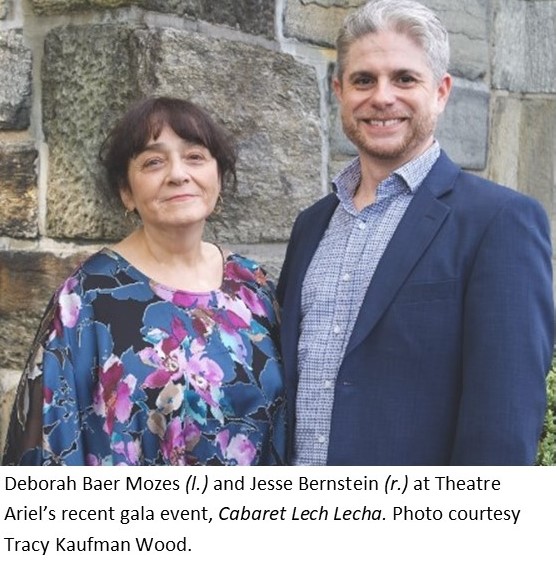 Jesse Bernstein is ready for the big stage.

The East Passyunk resident will take over as artistic director of Theatre Ariel, Philadelphia’s only professional theater company dedicated to telling stories of the Jewish experience.

“The first thing I ever wanted to be was a rabbi,” Bernstein says. “Then I discovered theater. Becoming the artistic director of a Jewish theater company seems like the perfect melding of my two passions.”

Bernstein fills a vacancy left by founding artistic director Deborah Baer Mozes, who held the position for 31 years. This month, Baer Mozes will transition out of her role, which coincides with her decision to make aliyah, as she will move back to Israel. During her time in Philadelphia, Baer Mozes guided the theater through more than 2,500 shows, employed more than 300 artists and entertained hundreds of thousands of theatergoers.

“Now, I can go forth, knowing that Theatre Ariel is in the skillful, wise and gifted hands of Artistic Director Jesse Bernstein,” Baer Mozes said.

Theatre Ariel will begin its 32nd season this fall under the leadership of Bernstein, who is an actor, writer, director and producer. He has more than 30 years of professional experience in theater, film and television.

“Theatre Ariel is poised to make a real impact on both the Jewish and cultural communities of Philadelphia,” Bernstein said. “We want to appeal to Jews of all affiliations and practices. My ideal Theatre Ariel audience has a man wearing a yarmulke sitting next to a secular, interfaith couple, both of them enjoying one of our Salons.”

Bernstein, who appeared on television’s Law & Order, Veronica Mars and Days of Our Lives, first collaborated with Baer Mozes in 2018 when Theate Ariel hosted the Alliance for Jewish Theatre’s annual conference. The theater produced Bernstein’s solo show Ethics of the Fathers, and he went on to create two additional solo pieces for the company before becoming the assistant artistic director.

Bernstein will lead the theater into a new five-year strategic plan that will attempt to maintain its current signature offerings of theatrical readings in intimate settings, while also looking to offer new programming, engage a wider audience, collaborate with local organizations and create unique ways for Jewish and non-Jewish audience members to engage.

“I believe today, even more than 31 years ago when I founded Theatre Ariel, that Jewish theater has a vital role to play in today’s America,” Baer Mozes states. “I can’t wait to see where Jesse Bernstein takes Theatre Ariel in the coming years.”