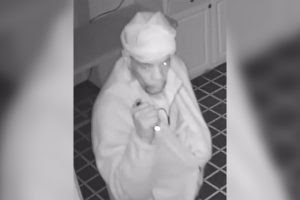 Police are looking for a suspect that allegedly set a fire to a business on the 2100 block of McKean Street on Feb. 24.

Philadelphia Police and Fire Departments responded to a reported fire at approximately 4:06 a.m. and quickly suppressed the fire, leading to no further damage. No adjoining properties were evacuated and no injuries were reported, police said.

According to police, surveillance video shows an unknown male enter the property and set several fires inside the property. He is described as a black male, in his late 50’s or early 60’s, wearing blue jean pants, a hat, multiple jacket layers and sneakers, police said.
To view this video and more, visit The Philadelphia Police YouTube Channel or http://phillypolice.com/news.

If anyone has any information about this crime or this suspect, they are asked to contact the Arson Task Force at (215) 446-7875.