There is an old saying that when challenges in life start to pile up and there aren’t many places to turn, the best approach is to “keep the faith.”

The coronavirus continues to challenge every aspect of society, from essentials we depend on, to what we want to enjoy in our spare time.

For many, it’s football. In Philadelphia, it’s the Eagles.

COVID-19 has presented many problems for the Birds as the team attempts to gear up for training camp and put together a squad that can make a playoff run.

It hasn’t been easy.

On July 29, the Eagles announced three players were placed on the Reserve/COVID-19 list – linebacker Nate Gerry and tackles Lane Johnson and Jordan Mailata.

Johnson posted on his Twitter account that he had tested positive for COVID-19 and was currently in self-quarantine.

The next day, Eagles franchise quarterback Carson Wentz was asked how comfortable he felt coming into NovaCare, knowing he has a young family and that a number of NFL players had opted out, including new teammate Marquise Goodwin, a veteran wide receiver the Eagles acquired in the offseason to help speed up an offense that was slow and running on fumes at the end of the 2019 season. Goodwin opted out over concerns for his newborn daughter.

“Yeah, [I’m] very aware that it is going to be a challenge,” Wentz said during his video conference. “We’ve talked about it a fair amount and you’ve got to be a professional 24/7, not just when you’re in the building now, but it’s how do you take care of yourself out of the building, and be smart and handle your business.”

Wentz, who looked noticeably bigger and stronger when he arrived for training camp, said this time the corny sayings about teamwork and chemistry will really play a role in the Birds’ chances for success.

“We really are all in this thing together,” Wentz said. “We say that all the time. It’s kind of the cliché thing, but has a little different meaning this year. And I’m not dumb about the different ways guys can still get it, how things might happen. And so you never know how this is going to unfold, but you know we’re going to do everything we can, as a team, to make sure, especially as leaders, to make sure guys are handling their business, not just in the building but outside the building, who they’re around and what they’re going to do. So it’s going to look different and it is going to be a challenge. But I think we in Philly are up for it and hopefully everyone around the league is afforded as well.”

The list became longer and longer as the Aug. 3 deadline to opt out approached. Wentz said he and his wife thought about it, but decided as a family to play.

“You never know how this is going to fully unfold, but I feel safe here,” Wentz said. “It was something that my wife and I talked a lot about, and prayed a lot about and we feel good with our decisions. But at the same time, I completely respect the guys that did decide to opt out for personal reasons, family reasons, health reasons.

“You know, like Marquise (Goodwin), I talked to him the other day. I fully respect his decision, obviously I’m bummed that I’m not going to be able to play with him, but fully respect those guys’ decisions, I do for a number of reasons.”

At the end of the weekend, the virus struck again.

The Eagles confirmed that coach Doug Pederson has tested positive for the coronavirus.

The team issued this statement on its website Sunday evening:

“We received confirmation this evening that Head Coach Doug Pederson tested positive for COVID-19. Pederson is asymptomatic and doing well. He is currently in self-quarantine and in communication with the team’s medical staff. The organization is following the protocols established by the NFL and the NFLPA. Any individuals in close contact with Pederson at our facility have been notified and will continue with daily testing procedures and compliance with all protocols before returning to the facility.”

The prior week, Pederson said he felt safe at NovaCare. On Monday, from his home, the fifth-year coach doubled-down on his confidence with the way the Eagles have been keeping their facility free of the virus.

“I want to reiterate the fact that I’m very comfortable and confident that the protocols that we have in place at NovaCare are for the best interest of the football team and all those that enter that building,” he said via video conference. “It still is a very safe environment, and one of the things that we all need to learn and what I need to learn, taking away from this, is obviously we need to protect ourselves when we are in the community away from the building, continue to wash our hands, wear our mask, do the social distancing that medical teams and doctors have prescribed.”

Pederson is the second NFL coach to test positive for the coronavirus.

It has also been reported that an Eagles staffer who was in close proximity to Pederson was sent home to self-quarantine.

Wentz says he will lead the offense as best he can. NFL teams can conduct only eight padded practices this summer.

Other than that, players will be relegated to the weight room, agility drills and walkthroughs until the season starts in September.

“I’m confident,” Wentz said. “For us, I think, you know, the lack of grass time. I think that makes it tough for us but I think it makes it tougher for everybody across the league. Everyone’s dealing with it. So if I’m being honest, I think we’re in a good place just because we do have a lot of carryover with a lot of the same coaches … obviously we’ve added some pieces, but for the most part the offense hasn’t changed. We’ve added some new pieces but I do feel like we’re going to be in a good place here once we’re able to finally get out there, practicing and hit the ground running.”

And keeping the faith. •• 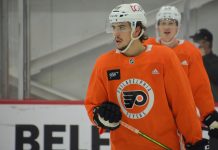 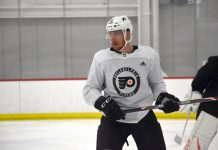