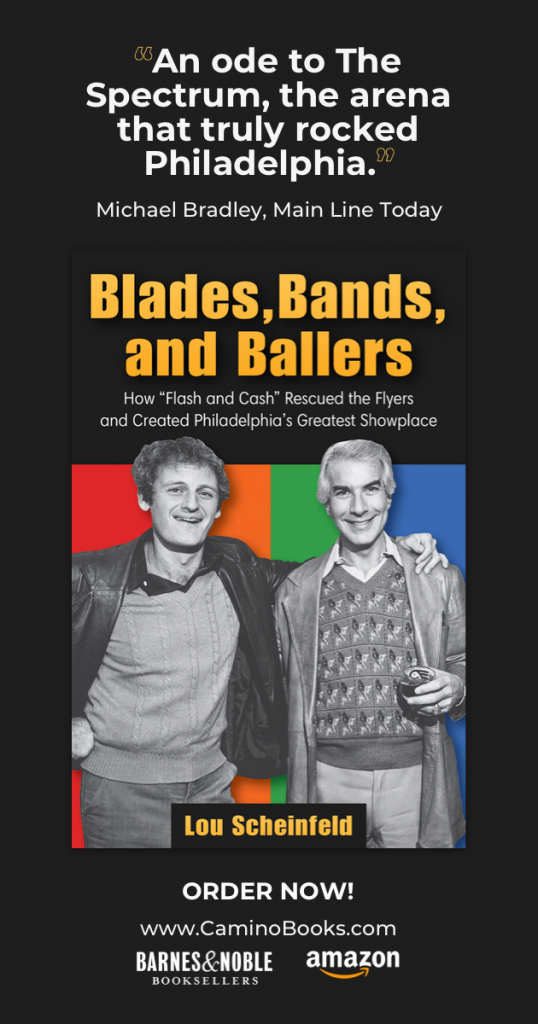 The Spectrum was so much more than an ordinary workplace for Lou Scheinfeld.

He’s the man credited with naming the famous entertainment venue that once occupied 4½ acres along Broad Street in South Philadelphia. And he ran it for years like a fine-oiled machine as some of the biggest games and biggest acts were witnessed in the 19,000-seat stadium from the late 1960s until the building was demolished in 2009.

“I watched them take it apart, brick by brick,” said Scheinfeld, now 86. “It was a really special place, I’d get in at 8 a.m. and sometimes work til midnight because there was a game or a show. I lived in that building.”

With a library of interesting personal stories to pull from, Scheinfeld penned the book Blades, Bands and Ballers about the rise and eventual fall of Philadelphia’s greatest showplace. It took five years to come to fruition.

“I started the book and I didn’t know what I was doing,” Scheinfeld said. “I had never written a book before. And I stopped. And about two years later I got back to it and it just kind of flowed. I didn’t have an outline. I didn’t have a list of chapters. I just wrote. I just felt like some of these stories are just so good that they needed to be told.”

Scheinfeld said his main goal of writing the book was to share stories with his children. He has seven.

“I’m on my second set of children,” he said. “My first four are all grown adults and the new three are a little younger. They’re all in their 20s now. But I wanted them to all know about my life. I’ve told stories before but I wanted them to be able to read it and talk about my life. I was lucky that I had an interesting life and an interesting childhood. It was something I just thought would be fun for my family to read.”

You don’t have to know Scheinfeld to enjoy his tales, although it’s likely you somehow crossed paths with him at some point, or at least shared the same passion he did for the city.

Scheinfeld passionately lobbied for the Spectrum moniker instead of the proposed “Keystone Arena” that was all but agreed upon by the powers that be at the time.

He formed a close relationship with former Flyers owner Ed Snider, and established the Flyers and Spectrum as North American brands. He watched as the Flyers and 76ers came to power and won a combined three championships in the ‘70s and ‘80s and saw the Spectrum blossom into a must-see concert venue, which housed some of the biggest acts in the world. The Spectrum was perfect for live events in so many ways.

“The action was so close that you could hear the players,” Scheinfeld said. “You could see the musicians. You could feel the vibrations in the building. We thought hockey and basketball and the circus and ice shows were going to carry the building at first. It turned out concerts became a huge factor. The sound was so fantastic because it was small and the word spread through the music world.”

The Rolling Stones, Bruce Springsteen, Frank Sinatra, Elvis Presley and Pearl Jam were notable acts in the building that, at one time, sat nestled between JFK and Veterans stadiums. Scheinfeld documents his rise from working in media, to his later dealings with Snider, Frank Rizzo and even the Philly mob. Scheinfeld and Snider eventually parted ways, leaving the building he had loved.

“We worked together for many years and things changed,” Scheinfeld recalled. “The more money that came in, he got more corporate and I’m not corporate. I don’t do focus groups, I just do it. For all those years, he gave me all the leeway, but then the lawyers came in and the company got bigger and I had to move on. Our parting wasn’t bad, but as I wrote in the book, I had enough of him at that point. He was tough and relentless in his pursuit of success. I couldn’t take that pace anymore so we parted.”

Only to reunite a quarter of a century later when the Spectrum’s final days had arrived. Scheinfeld was hired by Snider to close the building, which was emotional for him on many levels.

“We got friendly again,” he said of Snider. “About 28 years after I left, he called me to help close the Spectrum. And man, wasn’t that exciting.”

It brought back a rush of memories of Julius Erving, Bernie Parent, Bobby Clarke and so many others who had thrived in the Spectrum.

“Getting to know Bernie Parent, Julius Erving and Bobby Clarke — superstars that couldn’t have been more humble or appreciative of where they were in life,” Scheinfeld said. “Erving was always the last person out of the 76ers locker room because he would stay and give an interview to a high school reporter.”

Scheinfeld was just as generous with his words in documenting history in Blades, Bands and Ballers. The 192-page paperback book was published by Camino Books and sells for about $20. It first hit shelves in the fall and has sold considerably well.

“I’m extremely proud,” Scheinfeld said. “But I’ll tell you, when the publisher sent back the signed contract on Thanksgiving (2020), I cried. It gets me choked up to talk about it. Everyone talks about writing a book. I didn’t know if I’d ever write it or get it published. But when that contract came in the mail, I was so excited. To me it’s no small accomplishment. I didn’t know if it would sell 10 books or a thousand. It’s gratifying that so many have bought it and read it and enjoyed it.”

Scheinfeld still keeps busy as the CEO of the proposed Philadelphia Museum of Sports and contributes an hour-long radio show each week on Thursdays at 4 p.m. on WWDB 860 AM where he talks about sports memories and memorabilia. You can bet that the Spectrum comes up from time to time. He practically lived there and might have spent even more time there with a cozier sofa.

“I only slept there one night,” he said with a laugh. “It was horrific. You don’t want to sleep in an arena. It creeks and things crawl through the walls. It’s very spooky. I couldn’t sleep at all. I stayed on my sofa in my office but I didn’t sleep there. I just lived there.”