“I’m proud of all this team has accomplished this season,” Soul head coach Clint Dolezel said after the game. “We have worked very hard to get to this point and I’m excited to defend the title once again.”

“I just wanted to give us a chance to make plays,” Reynolds said in the Soul’s chaotic locker room after the win. “[Quarterback] Dan [Raudabaugh] had a great night. I can’t take all the credit for it. Dan made a lot of great throws from the pocket. Our line gave him time to make some great throws.”

The touchdown that ended up being the winning score was a wild one. With just under four minutes to go and the Soul leading 55–47, quarterback Dan Raudabaugh, who completed 23-of-35 passes for 324 yards and nine touchdowns, fired a pass to the corner of the end zone where there is a big two-door gate where the all the dance team members, promotional personnel and away team players come and go through.

As Reynolds made his leap for the ball, he ran out of arena and, and with a defender draped all over him, went into the gate, which incredibly opened up for him. It appeared to give Reynolds an extra step and allowed him to make the acrobatic catch to put the Soul up for good, 62–47.

Reynolds said he was just focusing in the ball, not the wall.

“When you are near the sideline you just have to tap your feet,” Reynolds said. “I felt the wall give but I couldn’t let go of the ball. I just decided to hold on to it.” The referees were good with it and the Soul were on the the championship game for the second year in a row.

Offensive lineman Michael Simons, a veteran of the league but in his first year with the Soul, said he could tell Reynolds and Raudabaugh were in the zone from the beginning.

“It’s playoff mode, man,” Simons said. “Everybody turns it up another notch. The thing with Dan is, he’s the best quarterback in the league. You give him time, he’s going to complete everything. He’s the best.”

Every Soul player and coach said they were thrilled to have the title game at home.

“Last year we had to go to Arizona to play in it,” Reynolds said. “This year our fans get to be at home and everybody’s going to come out and support us and get to enjoy it. We worked hard all year to make sure we had the ArenaBowl here.”

Dwayne Hollis, who is up for Arena Football League Defensive back of the Year, is equally as excited about the home field advantage.

“It’ll be a change,” Hollis said. “I’ve been to two neutral sites as a player in the ArenaBowl, and we went out to Arizona last year, it’ll be great to win one at home and celebrate with our fans here at home.”

Sources have revealed the Arena Football League is expanding with teams in Albany, N.Y. and Newark, N.J.

Hollis said he heard there may be new teams coming in and obviously was happy to see the league’s gamble with restrictions on who can own an AFL franchise appears to be paying off.

“It’s great for Arena Football,” Hollis said. “Once you see Arena Football one time, you’re hooked to it. I know the league has gone through its growing pains, going back to five teams (this year). I just want to give kudos to all the guys who stuck around to play in this five-team league. It’s going to pay off.” 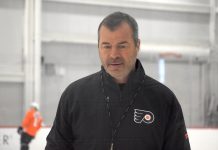