When Shayla Smith puts her mind to something, she’s proving she can do just about anything.

The Universal Audenried Charter School sophomore said she didn’t take basketball seriously until a couple of years ago. Once she locked in, she quickly became one of the best players in the Public League. And she’s only getting better.

“I played sports my whole life but I just started taking basketball seriously a couple years ago,” Smith said after scoring 24 points in an 81-64 win at Archbishop Ryan on Jan. 7.

Smith has averaged a double-double at 24 points and 16 rebounds per game through her first 18 contests this year as the Rockets were 13-5 through Jan. 14. She’s willing to do the tough work in the paint because that’s how she was raised. With three brothers, Smith started playing rough at an early age, and actually played football with the boys growing up. Smith was a quarterback, and a good one. And she didn’t shy away from the physicality of the sport

“It felt regular I guess,” she said. “It’s just what I did. It was really nothing. I actually liked (the contact) a little bit. I was just always physical.”

Smith may have had no fear, but that wasn’t always the case for her father, John. But he was quickly convinced that his daughter could hold her own against the boys.

“For sure, you worry about every play, but she’s tough,” proud dad said. “She followed behind her brothers and really wanted to play football so I let her play.”

Although she was good at football, she’s even better at hoops. Smith made the transition to the hardwood full-time and there’s been no looking back.

“When she came to me two summers ago as an eighth-grader, we started working with her every day,” said Audenried girls basketball coach Kevin Slaughter. “She’s a hard-working kid and comes from a good family with a great mother and father support system. She’s only 15 now so basically she is a product of playing rough tough with boys.”

After discovering her talent, Smith has been on the highway to success, attending the John Lucas Enterprises Top 160 Invitational Camp in Houston Texas and the ESPN EYBL Nike Nationals.

“She’s one of the top 50 10th-graders in the country,” Slaughter said. “She’s a USA Basketball candidate.”

And she’s getting plenty of added attention as Audenried packed its schedule with travel showcases against premier opponents. But they’re not just there to see Smith. The Rockets have plenty of players who can light up the scoreboard on any given night. Junior Aniyah Howard and senior ZayAhni Neurell also average double-digit scoring.

“It’s good to know I don’t have to do everything by myself,” Smith said. “I’ve had that problem before. The part of being a leader is making everyone around you better, too.”

It’s allowed the Rockets to compete against the best. They’ve played teams from Delaware, Maryland and South Carolina as well as opponents from the Catholic League and top-notch private and public schools in the area.

“It’s the experience with the kids,” Slaughter said. “They’re not afraid of anybody. Sometimes in the past, the team didn’t take basketball seriously. These kids take it seriously and they really want it. They all want to go to college and get good grades.” 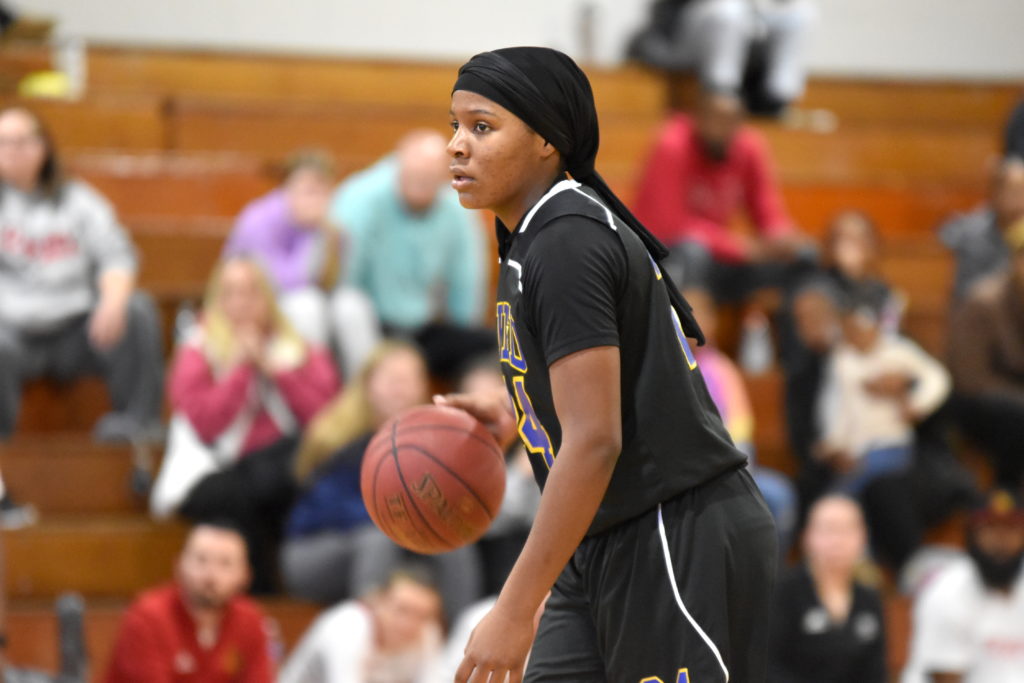 Slaughter credits an infusion of former local talent as Neumann-Goretti grad Ciani Cryor, who was a key cog in the Saints’ undefeated state championship team in 2015, has joined the coaching staff as an assistant.

“We always had male coaches and male father figures and mentors,” Slaughter said. “But when we brought her back, it was like having a female here who did it. She put Neumann-Goretti on the map and she really helped us. She brings a championship mentality.”

The Rockets are soaring and Smith is filling the basket as she continues to garner attention from colleges. There’s aspirations of a Public League title, districts and states. But Smith is living in the moment.

“It feels great but at the same time I’m trying to stay grounded,” she said. “You can’t let that get to your head. Just need to keep working. I’m nowhere near where I want to be.”